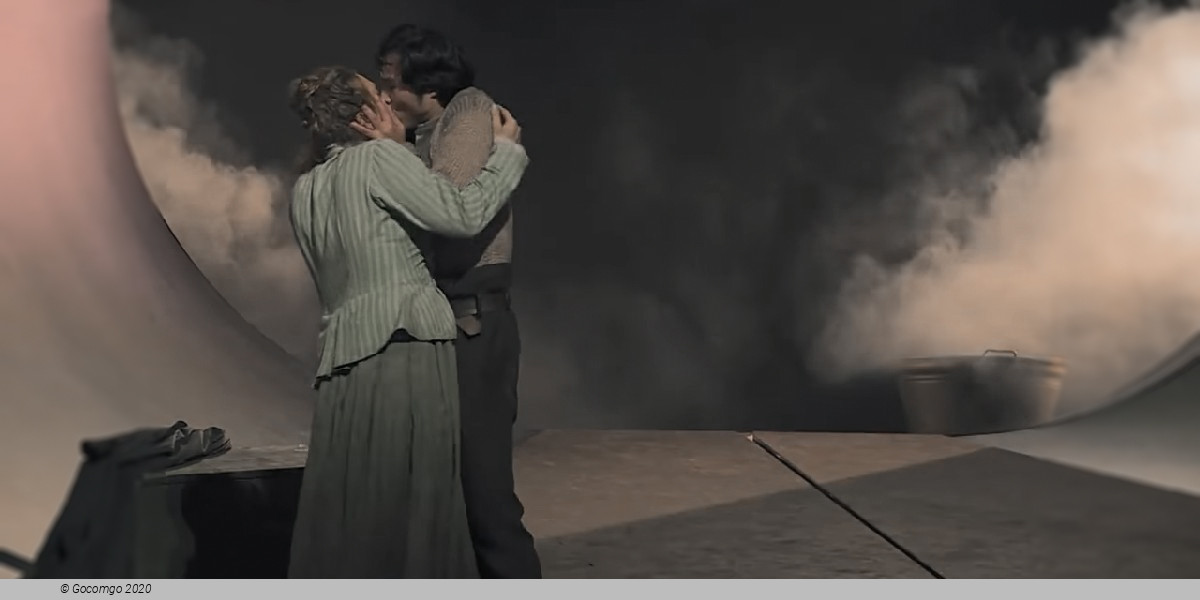 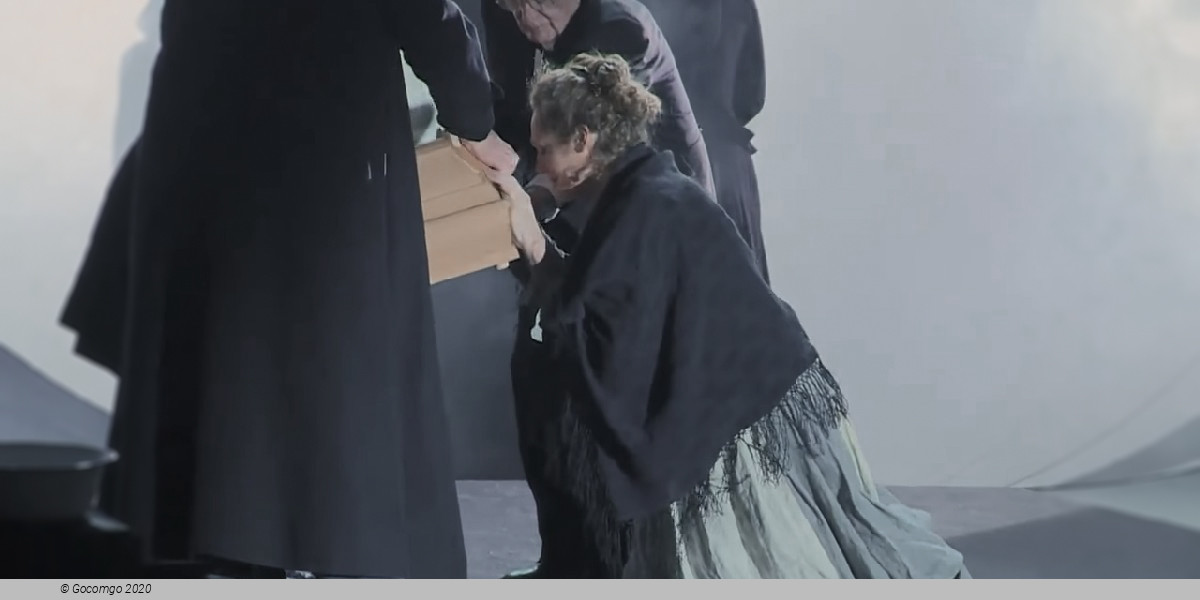 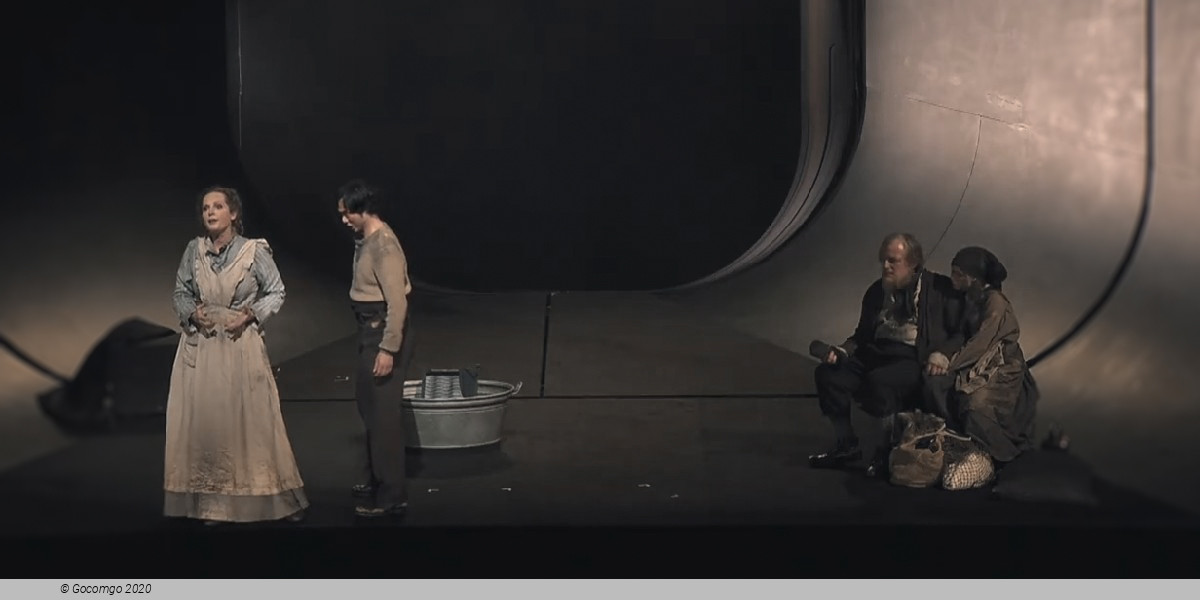 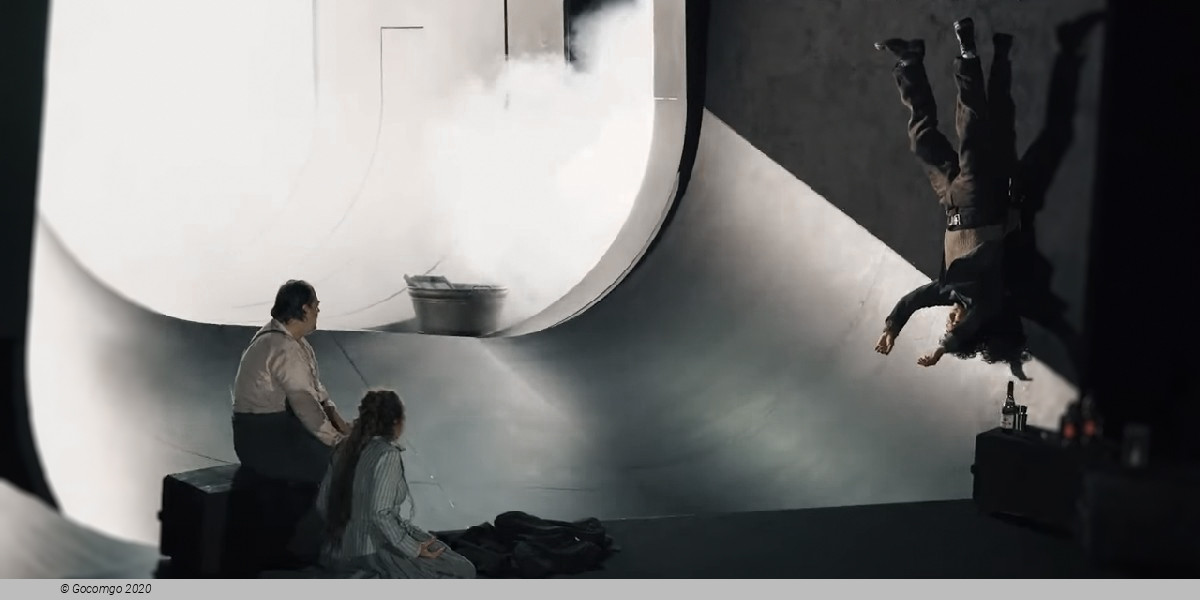 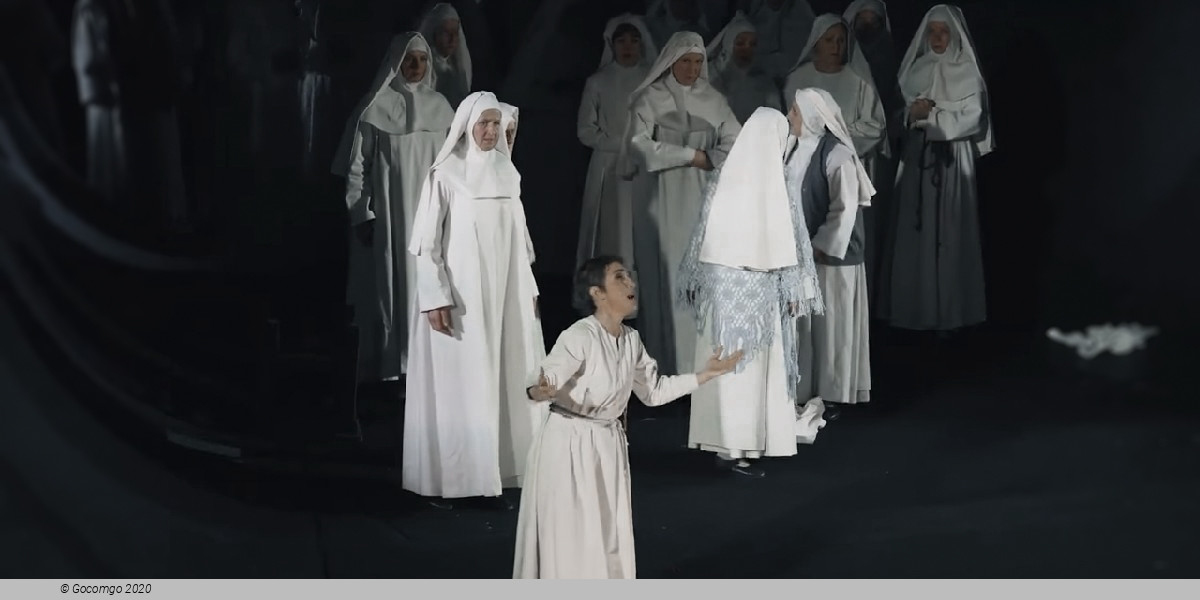 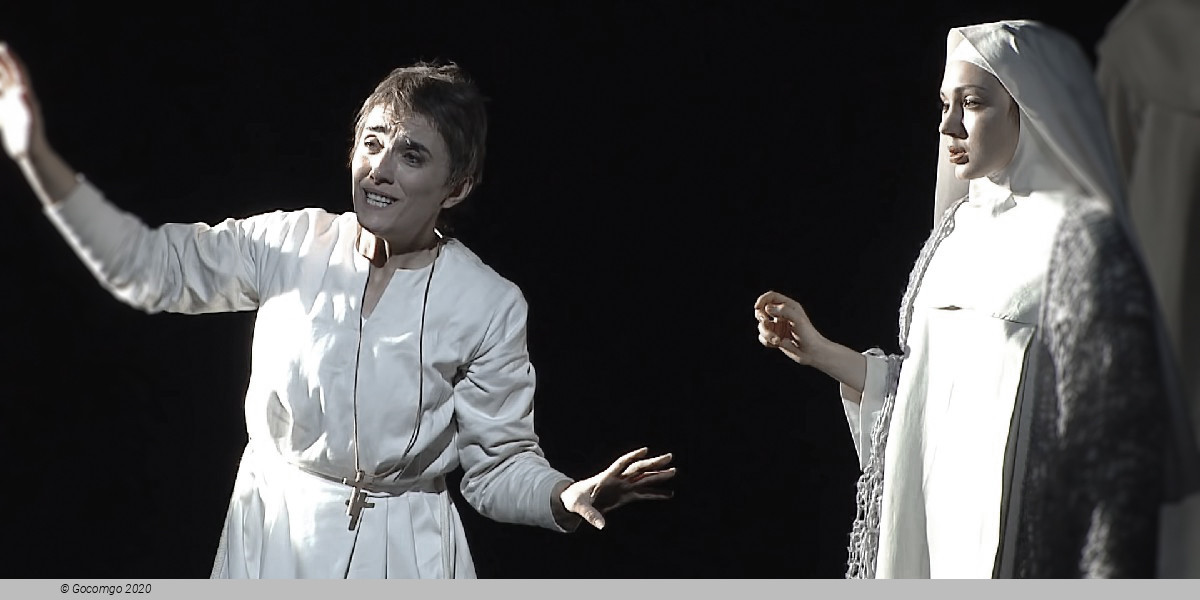 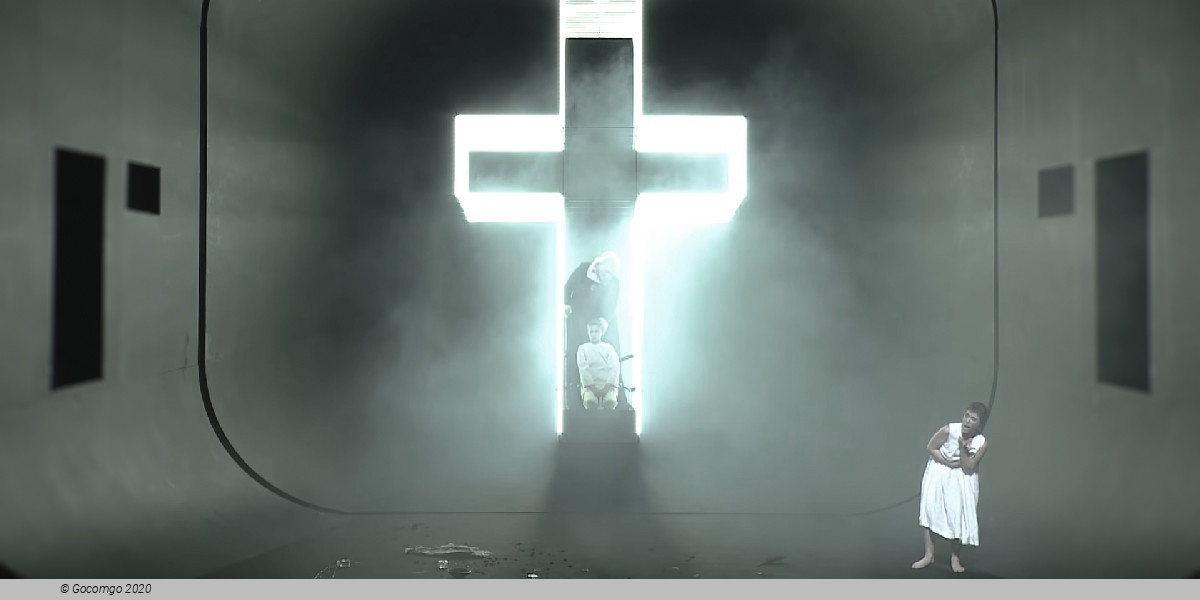 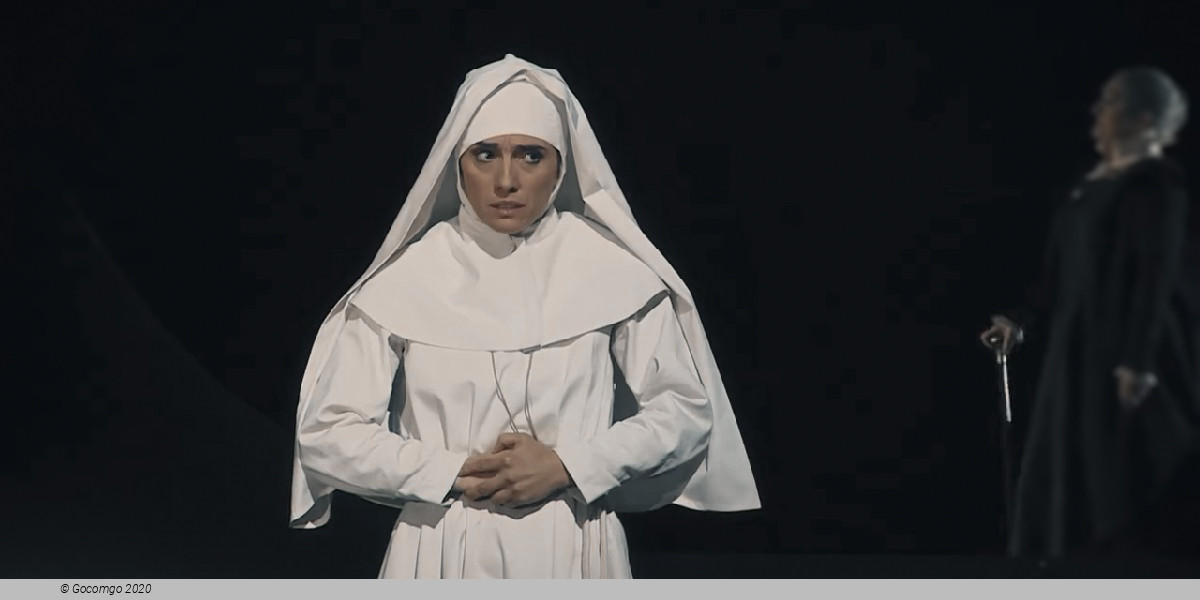 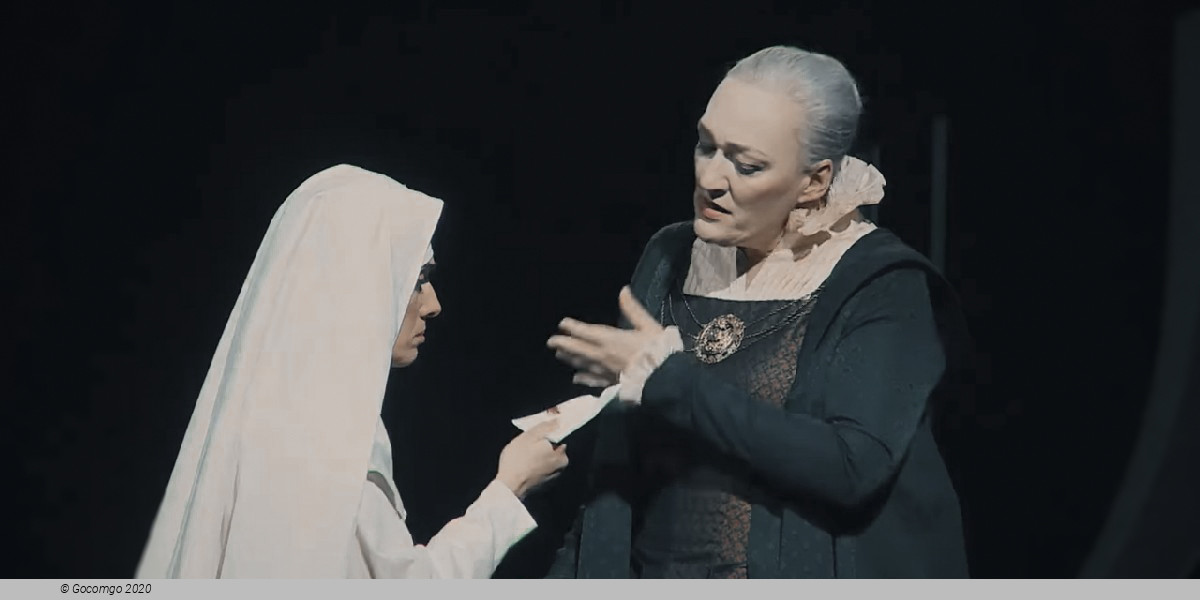 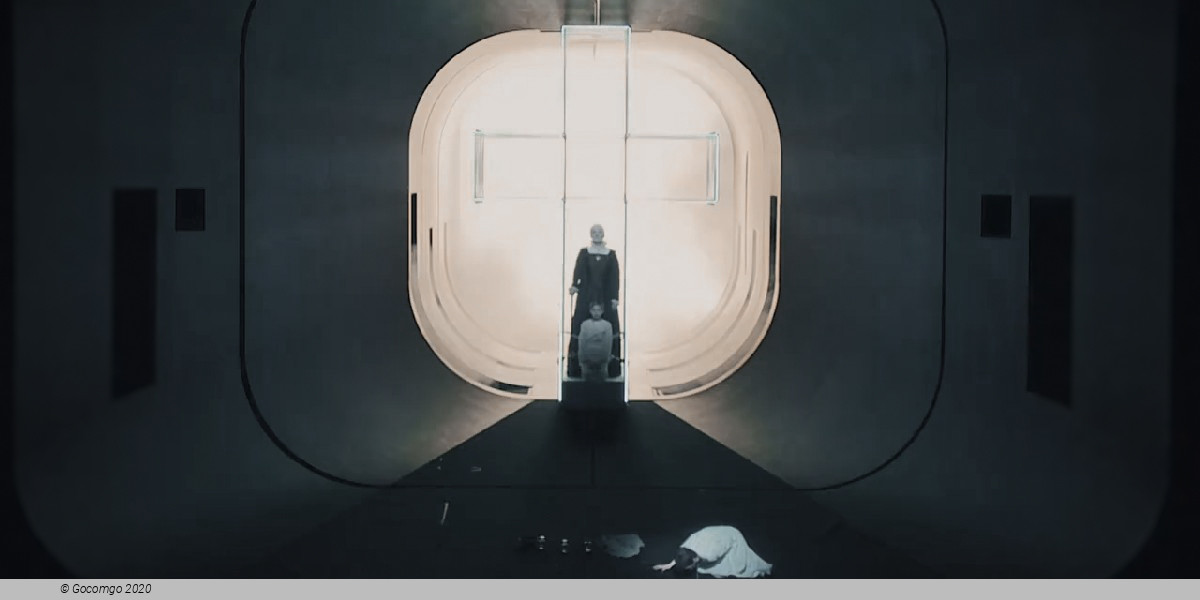 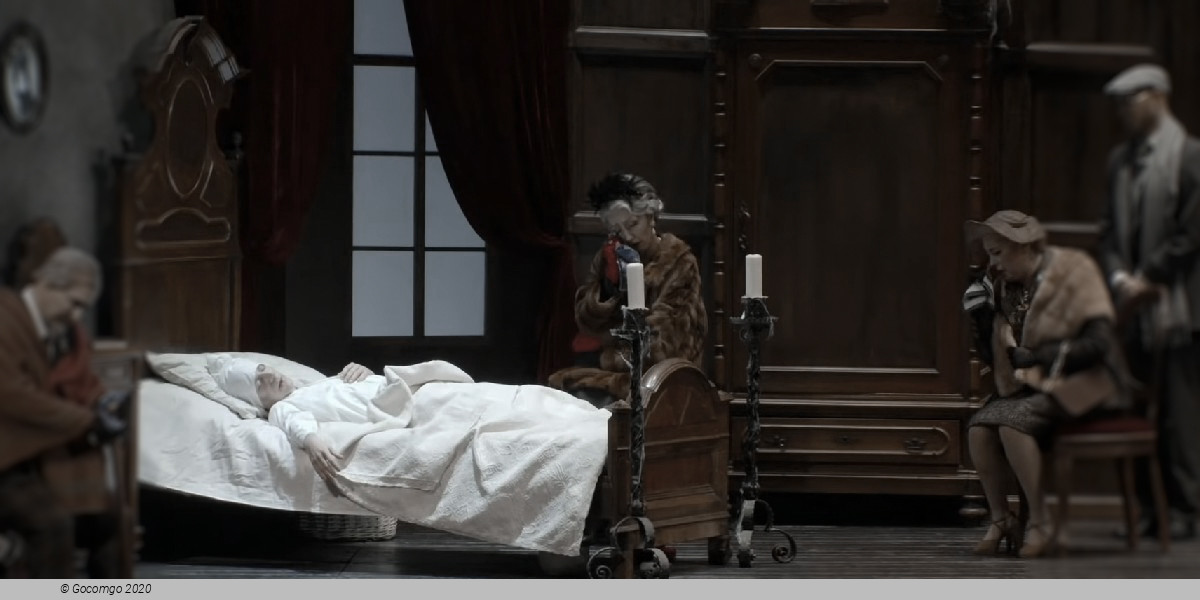 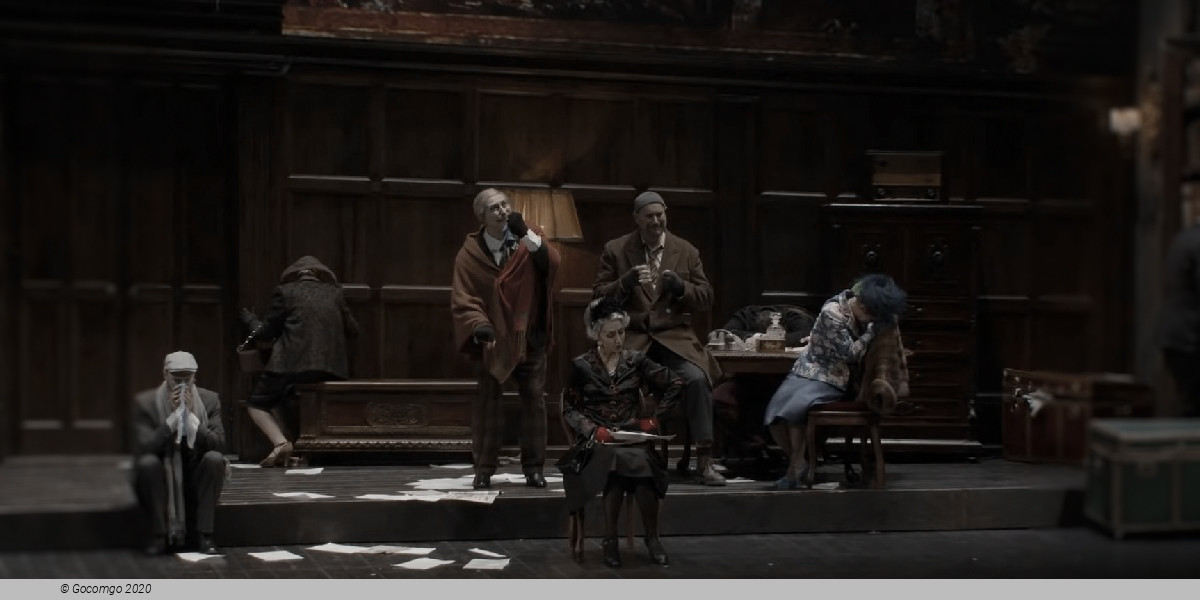 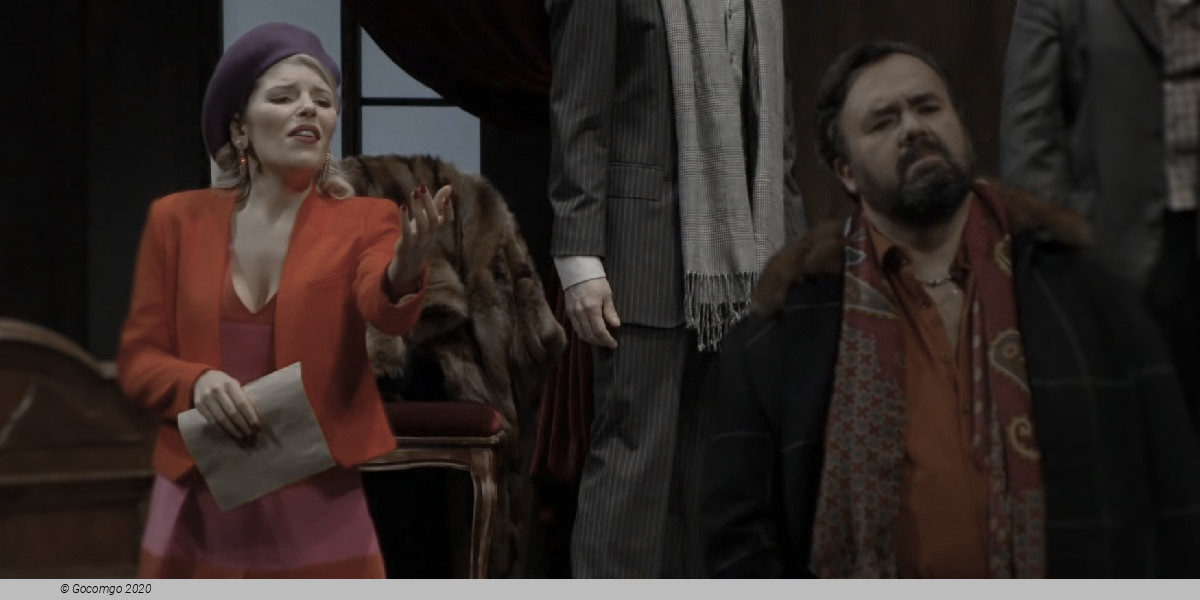 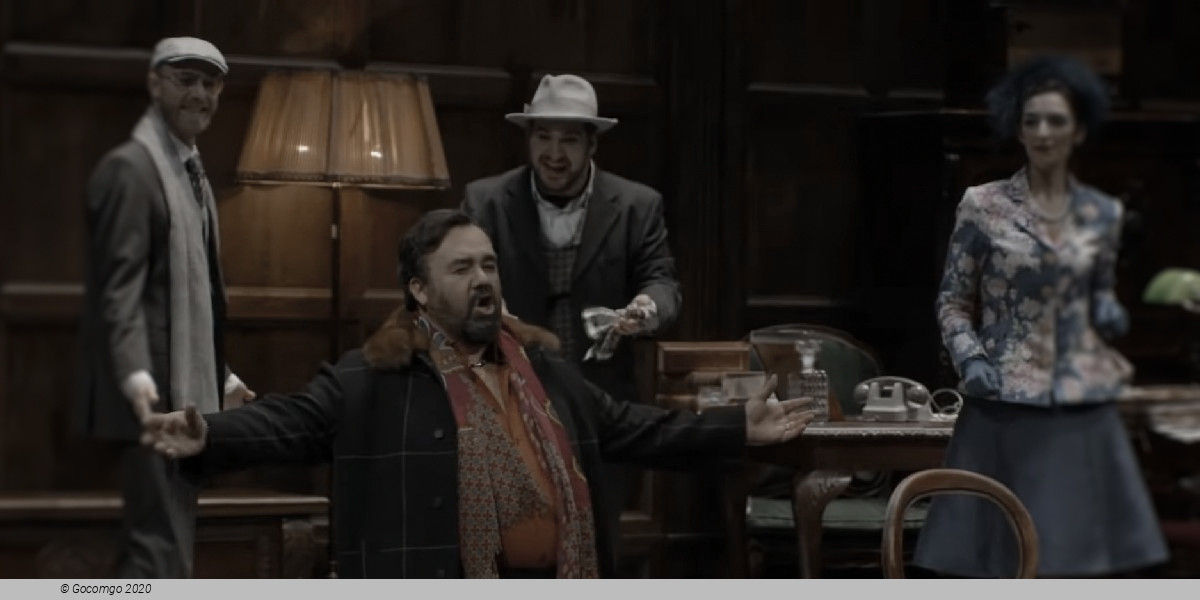 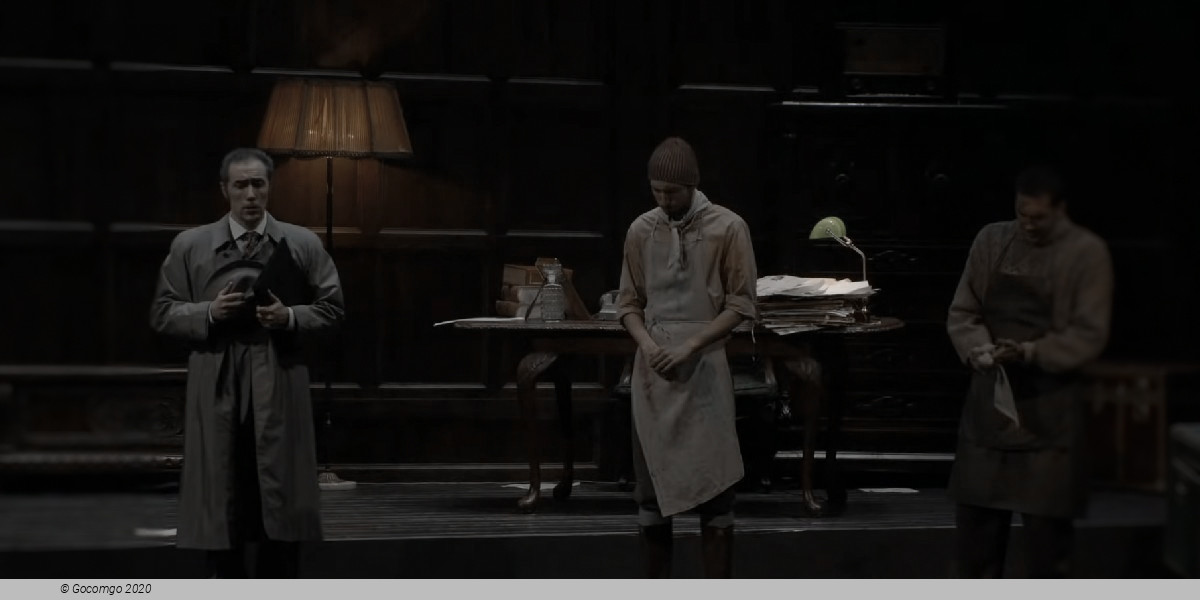 Lotte de Beer's production from the Bayerische Staatsoper in Munich offers us an incomparable show in which the action unfolds in a single space enclosed by curved walls and the three scores are linked together by the idea of death. Her excellent stage direction makes all the characters shine. The luxury cast, including Lise Davidsen, Ermonela Jaho, Ambrogio Maestri, Daniela Barcellona and Ruth Iniesta, will make this Trittico one of the season's highlights.

Puccini can be viewed as the engineer who, by completing the bridge Verdi had begun, connected Italian tradition directly with modernity. In his last works (of which Il Trittico is one), he anticipates the more modern forms of Debussy or Strauss.

Puccini sets his own personal seal on each of these operatic gems: a thriller set on the banks of the Seine (Il tabarro), the suffering, death and glorification of a nun whose child has been taken from her (Suor Angelica), and a humorous satire about a will which the relatives try to change by impersonating the deceased (Gianni Schicchi).

These three one-act operas seem unconnected. But are they? Giacomo Puccini assembled them under the title Il trittico (the triptych) and they are facets of a single reality. Instead of making a vain attempt to portray the whole world in a long opera, as in an epic novel, he selects three events and brings them together in a work of music which seeks to convey every shade of human emotion with intensity: from implacable coldness of heart to burning passion, via avarice, artfulness or parody.

Il tabarro (The Cloak) is an opera in one act by Giacomo Puccini to an Italian libretto by Giuseppe Adami, based on Didier Gold's play La houppelande. It is the first of the trio of operas known as Il trittico. The first performance was given on 14 December 1918 at the Metropolitan Opera in New York City.

Suor Angelica (Sister Angelica) is an opera in one act by Giacomo Puccini to an original Italian libretto by Giovacchino Forzano. It is the second opera of the trio of operas known as Il trittico (The Triptych). It received its world premiere at the Metropolitan Opera on December 14, 1918.

Gianni Schicchi is a comic opera in one act by Giacomo Puccini to an Italian libretto by Giovacchino Forzano, composed in 1917–18. The libretto is based on an incident mentioned in Dante's Divine Comedy. The work is the third and final part of Puccini's Il trittico (The Triptych)—three one-act operas with contrasting themes, originally written to be presented together. Although it continues to be performed with one or both of the other trittico operas, Gianni Schicchi is now more frequently staged either alone or with short operas by other composers. The aria "O mio babbino caro" is one of Puccini's best known, and one of the most popular arias in opera.

The Gran Teatre del Liceu, or simply Liceu in Catalan, is a main opera house in Barcelona, Catalonia, located on the central street of the city - La Rambla. The Liceu opened on 4 April 1847.

The Gran Teatre del Liceu dates back to 1837 when at the instigation of Manuel Gibert, a battalion of the National Militia formed the institutional core of the future Teatre in the unused monastery of Montsió (currently Portal del Ángel): a dramatic society of aficionados devoted to the performing arts. The first show premiered on 21 August 1837: El marido de mi mujer, by Ventura de la Vega, a dance number and a skit.

A theatre was built in the convent building — named Teatro de Montesión or Teatro del Liceo de Montesión — and plays and operas were performed: the first was Vicenzo Bellini's Norma (3 February 1838). The repertoire was Italian, the most performed composers being Donizetti and Mercadante as well as Bellini and Rossini. The Barcelona premiere of Hérold's Zampa was held here.

In 1838, the society changed its name to Liceo Dramático Filarmónico de S. M. la Reina Isabel II (Dramatic Philharmonic Lyceum of H.M. Queen Isabel II). Lack of space, as well as pressures, brought to bear by a group of nuns (who were the former proprietors of the convent and had recovered rights to return), motivated the Liceu to leave its headquarters in 1844. The last theatre performance was on 8 September.

The Trinitarian convent building located in the center of the town at la Rambla was purchased. The managers of the Liceu entrusted Joaquim de Gispert d'Anglí with a project to make the construction of the new building viable. Two different societies were created: a "building society" and an "auxiliary building society". Shareholders of the building society obtained the right of use in perpetuity of some theatre boxes and seats in exchange for their economic contributions. Those of the second society contributed the rest of the money necessary in exchange for property of other spaces in the building including some shops and a private club called the Círculo del Liceo.

In contrast with many other European cities, where the monarchy took on the responsibility of the building and upkeep of opera houses, the Liceu was funded by private shareholders of what would become the Societat del Gran Teatre del Liceu (Great Liceu Theatre Society), organized similarly to a trading company or society. This is reflected in the building's architecture; for example, there exists no royal box. The Queen did not contribute to the construction, so the name of the society was changed to Liceo Filarmónico Dramático, removing the Queen's name from it.

Miquel Garriga i Roca was the architect contracted; the construction began on 11 April 1845. The theatre was inaugurated on 4 April 1847.

Opening, fire, and rebuilding (1847–1862)
The inauguration presented a mixed program including the premieres of José Melchior Gomis' musical Ouverture, a historical play Don Fernando de Antequera by Ventura de la Vega, the ballet La rondeña (The girl from Ronda) by Josep Jurch, and a cantata Il regio himene with music by the musical director of the theatre Marià Obiols. The first complete opera, Donizetti's Anna Bolena was presented on 17 April. At this point, Liceu was the biggest opera house in Europe with 3,500 seats. Other operas performed in the Liceu during the first year were (in chronological order): I due Foscari (Verdi), Il bravo (Mercadante), Parisina d'Este (Donizetti), Giovanna d'Arco (Verdi), Leonora (Mercadante), Ernani (Verdi), Norma (Bellini), Linda di Chamounix (Donizetti) and Il barbiere di Siviglia (Rossini).

The building was severely damaged by fire on 9 April 1861, but it was rebuilt by the architect Josep Oriol Mestres and re-opened on 20 April 1862, performing Bellini's I puritani. From the old building, only the facade, the entrance hall, and the foyer (Mirrors Hall) remained.

Bombing and civil war (1862–1940)
On 7 November 1893, on the opening night of the season and during the second act of the opera Guillaume Tell by Rossini, two Orsini bombs were thrown into the stalls of the opera house. Only one of the bombs exploded; some twenty people were killed and many more were injured. The attack was executed by anarchist Santiago Salvador and deeply shocked Barcelona, becoming a symbol of the turbulent social unrest of the time. The Liceu re-opened its doors on 18 January 1894, but the seats occupied by those killed were not used for a number of years. The second bomb was put in the Van Gogh Museum in 2007 during an exhibit on Barcelona around 1900.

In 1909, the auditorium ornamentation was renewed. Spanish neutrality during World War I allowed the Catalan textile industry to amass enormous wealth by supplying the warring parties. The 1920s were prosperous years and the Liceu became fully established as a leading opera house welcoming better singers, the orchestra leaders of the time, and companies such as Sergei Diaghilev's Ballets Russes.

When the Second Spanish Republic was proclaimed in 1931, political instability meant that the Liceu suffered a severe financial crisis which was only overcome through subsidies from the Barcelona City Council and the government of Catalonia. During the Spanish Civil War, the Liceu was nationalized and took the name the Teatre del Liceu – Teatre Nacional de Catalunya (Liceu Opera House – the National Theatre of Catalonia). The opera seasons were suspended. After the war, it was returned to its original owners in 1939.

"Silver Age" and crisis (1940–1980)
From 1940 to the 1960s, the seasons were high-quality ones. 1955, thanks to the creation of a special board, saw a historic event when for the first time since its foundation, the Bayreuth Festival was staged away from its normal venue. Performances of Parsifal, Tristan und Isolde, and Die Walküre with innovative stage sets by Wieland Wagner were enthusiastically received.

In the 1970s, an economic crisis affected the theatre and the privately based organization could not afford the increasing budgets of modern opera productions and general quality declined.

New direction and second fire (1980–1994)
The death of Joan Antoni Pàmias in 1980 revealed the need for the intervention of the official bodies if the institution was to remain a leading opera house. In 1981, the Generalitat de Catalunya, with Barcelona's City Council and the Societat del Gran Teatre del Liceu, created the Consorci del Gran Teatre del Liceu (Consortium of the Great Liceu Theater) responsible for the theatre's management.

The Deputation of Barcelona and the Spanish Ministry of Culture joined the Consortium in 1985 and 1986 respectively. The Consortium managed to quickly attract the public back to the Liceu owing to a considerable improvement in its artistic standard. This included a more complete and up-to-date perspective of the very nature of an opera performance, a great improvement in the choir and orchestra, careful casting, and attracting the interest of the public to other aspects of productions besides the leading roles alone. This approach, coupled with the new economic support and more demanding and discerning public, resulted in a high standard of production.

The seasons organized by the Consortium maintained high standards in casting, production, and public loyalty, as measured by public attendance, but all this came to a halt with a fire on 31 January 1994. The building was destroyed by a fire caused by a spark that accidentally fell on the curtain during a routine repair. At this time, Paul Hindemith's Mathis der Maler was performing at the theatre and the following opera to be performed was Puccini's Turandot.

The public and institutional response were unanimous on the need to rebuild a new opera house on the same site with improved facilities. The new Liceu is the result of a series of actions to preserve those parts of the building unaffected by the fire, the same ones as had survived the fire in 1861. The auditorium was rebuilt with the same layout, except for the roof paintings which were replaced with new artworks by Perejaume, and state-of-the-art stage technology.

Reopening (1994–present)
From 1994 until the reopening in 1999, the opera seasons in Barcelona took place in: Palau Sant Jordi arena (only some massive performances in 1994), Palau de la Música Catalana, and Teatre Victòria. The rebuilt, improved, and the expanded theatre opened on 7 October 1999, with Puccini's Turandot as previewed in 1994 before the fire. The new venue had the same traditional horseshoe-shaped auditorium as before but with greatly improved technical, rehearsal, office, and educational facilities, a new rehearsal hall, a new chamber opera and small performances hall, and much more public space. Architects for the rebuilding project were Ignasi de Solà-Morales and Xavier Fabré i Lluís Dilmé.

Surtitles, projected onto a screen above the proscenium, are used for all opera performances and some lieder concerts. The electronic libretto system provides translations (to English, Spanish, or Catalan) onto small individual monitors for most of the seats.