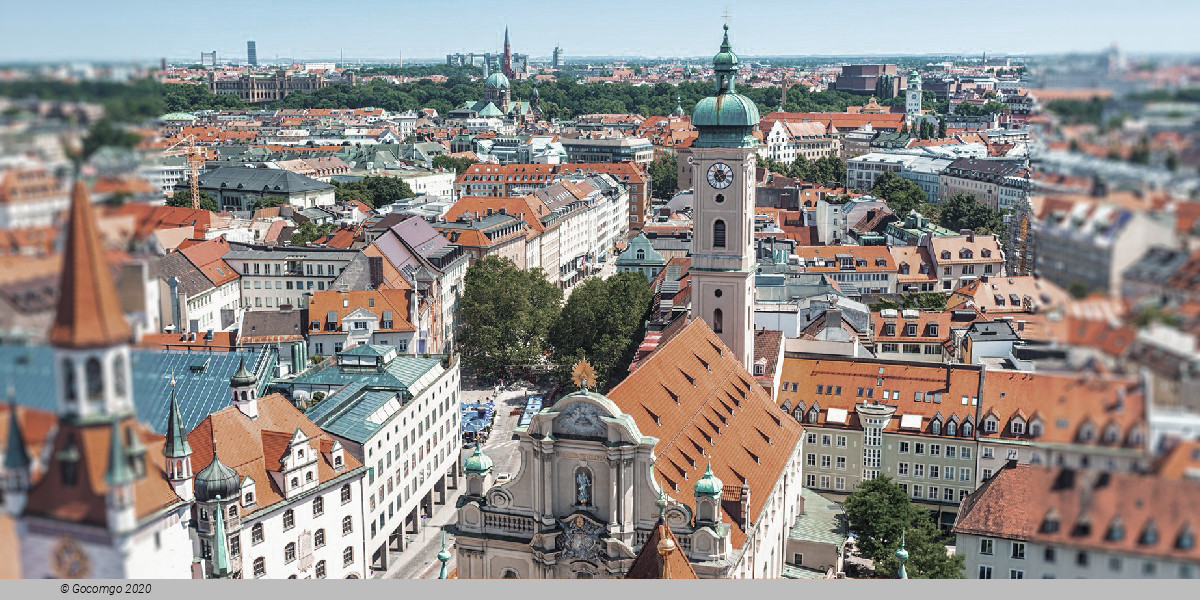 Munich is the capital and most populous city of the German state of Bavaria. Today, Munich is a global centre of art, science, technology, finance, publishing, culture, innovation, education, business, and tourism and enjoys a very high standard and quality of living. Munich is a major international cultural centre and has played host to many prominent composers including Orlando di Lasso, W.A. Mozart, Carl Maria von Weber, Richard Wagner, Gustav Mahler, Richard Strauss, Max Reger and Carl Orff. With the Munich Biennale founded by Hans Werner Henze, and the A*DEvantgarde festival, the city still contributes to modern music theatre. Some of classical music's best-known pieces have been created in and around Munich by composers born in the area, for example Richard Strauss's tone poem Also sprach Zarathustra or Carl Orff's Carmina Burana.

At the Nationaltheater several of Richard Wagner's operas were premiered under the patronage of Ludwig II of Bavaria. It is the home of the Bavarian State Opera and the Bavarian State Orchestra. Next door, the modern Residenz Theatre was erected in the building that had housed the Cuvilliés Theatre before World War II. Many operas were staged there, including the premiere of Mozart's Idomeneo in 1781. The Gärtnerplatz Theatre is a ballet and musical state theatre while another opera house, the Prinzregententheater, has become the home of the Bavarian Theatre Academy.

Munich's contributions to modern popular music are often overlooked in favour of its strong association with classical music, but they are numerous: the city has had a strong music scene in the 1960s and 1970s, with many internationally renowned bands and musicians frequently performing in its clubs. Furthermore, Munich was the centre of Krautrock in southern Germany, with many important bands such as Amon Düül II, Embryo or Popol Vuh hailing from the city. In the 1970s, the Musicland Studios developed into one of the most prominent recording studios in the world, with bands such as the Rolling Stones, Led Zeppelin, Deep Purple and Queen recording albums there. Munich also played a significant role in the development of electronic music, with genre pioneer Giorgio Moroder, who invented synth disco and electronic dance music, and Donna Summer, one of disco music's most important performers, both living and working in the city. In the late 1990s, Electroclash was substantially co-invented if not even invented in Munich, when DJ Hell introduced and assembled international pioneers of this musical genre through his International DeeJay Gigolo Records label here. Other examples of notable musicians and bands from Munich are Konstantin Wecker, Willy Astor, Spider Murphy Gang, Münchener Freiheit, Lou Bega, Megaherz, FSK, Colour Haze and Sportfreunde Stiller.

Music is so important in the Bavarian capital that the city hall gives permissions every day to ten musicians for performing in the streets around Marienplatz. This is how performers such as Olga Kholodnaya and Alex Jacobowitz are entertaining the locals and the tourists every day.

Next to the Bavarian Staatsschauspiel in the Residenz Theatre (Residenztheater), the Munich Kammerspiele in the Schauspielhaus is one of the most important German-language theatres in the world. Since Gotthold Ephraim Lessing's premieres in 1775 many important writers have staged their plays in Munich such as Christian Friedrich Hebbel, Henrik Ibsen and Hugo von Hofmannsthal.

The city has several important art galleries, most of which can be found in the Kunstareal, including the Alte Pinakothek, the Neue Pinakothek, the Pinakothek der Moderne and the Museum Brandhorst. The Alte Pinakothek contains a treasure trove of the works of European masters between the 14th and 18th centuries. The collection reflects the eclectic tastes of the Wittelsbachs over four centuries and is sorted by schools over two floors. Major displays include Albrecht Dürer's Christ-like Self-Portrait (1500), his Four Apostles, Raphael's paintings The Canigiani Holy Family and Madonna Tempi as well as Peter Paul Rubens large Judgment Day. The gallery houses one of the world's most comprehensive Rubens collections. The Lenbachhaus houses works by the group of Munich-based modernist artists known as Der Blaue Reiter (The Blue Rider).

The Deutsches Museum or German Museum, located on an island in the River Isar, is the largest and one of the oldest science museums in the world. Three redundant exhibition buildings that are under a protection order were converted to house the Verkehrsmuseum, which houses the land transport collections of the Deutsches Museum. Deutsches Museum's Flugwerft Schleissheim flight exhibition centre is located nearby, on the Schleissheim Special Landing Field. Several non-centralised museums (many of those are public collections at Ludwig-Maximilians-Universität) show the expanded state collections of palaeontology, geology, mineralogy, zoology, botany and anthropology.

An important collection of Greek and Roman art is held in the Glyptothek and the Staatliche Antikensammlung (State Antiquities Collection). King Ludwig I managed to acquire such pieces as the Medusa Rondanini, the Barberini Faun and figures from the Temple of Aphaea on Aegina for the Glyptothek. Another important museum in the Kunstareal is the Egyptian Museum.

The gothic Morris dancers of Erasmus Grasser are exhibited in the Munich City Museum in the old gothic arsenal building in the inner city.

Another area for the arts next to the Kunstareal is the Lehel quarter between the old town and the river Isar: the Museum Five Continents in Maximilianstraße is the second largest collection in Germany of artefacts and objects from outside Europe, while the Bavarian National Museum and the adjoining Bavarian State Archaeological Collection in Prinzregentenstraße rank among Europe's major art and cultural history museums. The nearby Schackgalerie is an important gallery of German 19th-century paintings.

The largest beer festival in the world, Munich's Oktoberfest runs for 16–18 days from the end of September through early October. Oktoberfest is a celebration of the wedding of Bavarian Crown Prince Ludwig to Princess Therese of Saxony-Hildburghausen which took place on 12 October 1810. In the last 200 years the festival has grown to span 85 acres and now welcomes over 6 million visitors every year. There are 14 beer tents which together can seat 119,000 attendees at a time, and serve beer from the six major breweries of Munich: Augustiner, Hacker-Pschorr, Löwenbräu, Paulaner, Spaten and Staatliches Hofbräuhaus. Over 7 million liters of beer are consumed at each Oktoberfest. There are also over 100 rides ranging from bumper cars to full-sized roller coasters, as well as the more traditional Ferris wheels and swings. Food can be bought in each tent, as well as at various stalls throughout the fairgrounds. Oktoberfest hosts 144 caterers and employees 13,000 people.

Cool, Hidden, and Unusual Things to Do in Munich