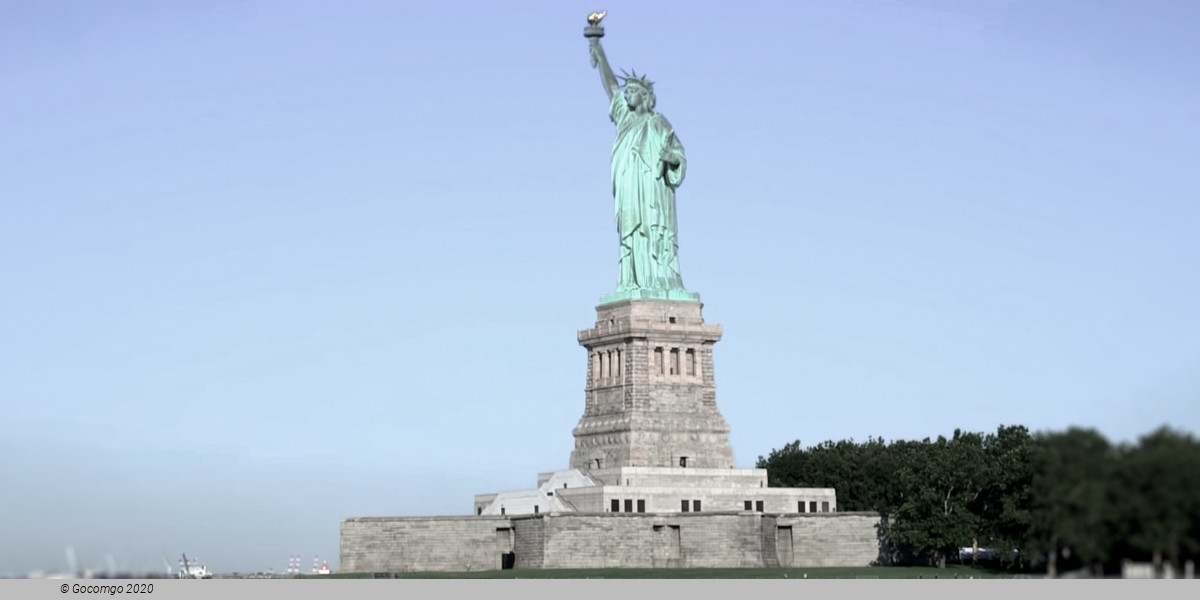 New York, often called New York City (NYC) to distinguish it from the State of New York, is the most populous city in the United States. New York City is a global cultural, financial, and media center with a significant influence on commerce, entertainment, research, technology, education, politics, tourism, dining, art, fashion, and sports. New York is the most photographed city in the world. The Statue of Liberty greeted millions of immigrants as they came to the U.S. by ship in the late 19th and early 20th centuries, and is a symbol of the U.S. and its ideals of liberty and peace. In the 21st century, New York has emerged as a global node of creativity and entrepreneurship. Many districts and monuments in New York City are major landmarks. Times Square is the brightly illuminated hub of the Broadway Theater District, one of the world's busiest pedestrian intersections, and a major center of the world's entertainment industry. Many of the city's landmarks, skyscrapers, and parks are known around the world, as is the city's fast pace, spawning the term New York minute.

New York City has been described as the cultural capital of the world by Manhattan's Baruch College. A book containing a series of essays titled New York, Culture Capital of the World, 1940–1965 has also been published as showcased by the National Library of Australia. In describing New York, author Tom Wolfe said, "Culture just seems to be in the air, like part of the weather."

Numerous major American cultural movements began in the city, such as the Harlem Renaissance, which established the African-American literary canon in the United States. The city became the center of stand-up comedy in the early 20th century, jazz in the 1940s, abstract expressionism in the 1950s, and the birthplace of hip hop in the 1970s. The city's punk and hardcore scenes were influential in the 1970s and 1980s. New York has long had a flourishing scene for Jewish American literature.

The city is the birthplace of many cultural movements, including the Harlem Renaissance in literature and visual art; abstract expressionism (also known as the New York School) in painting; and hip hop, punk, salsa, freestyle, Tin Pan Alley, certain forms of jazz, and (along with Philadelphia) disco in music. New York City has been considered the dance capital of the world. The city is also frequently the setting for novels, movies (see List of films set in New York City), and television programs. New York Fashion Week is one of the world's preeminent fashion events and is afforded extensive coverage by the media. New York has also frequently been ranked the top fashion capital of the world on the annual list compiled by the Global Language Monitor.

New York City has more than 2,000 arts and cultural organizations and more than 500 art galleries. The city government funds the arts with a larger annual budget than the National Endowment for the Arts. Wealthy business magnates in the 19th century built a network of major cultural institutions, such as Carnegie Hall and the Metropolitan Museum of Art, which have become internationally renowned. The advent of electric lighting led to elaborate theater productions, and in the 1880s, New York City theaters on Broadway and along 42nd Street began featuring a new stage form that became known as the Broadway musical. Strongly influenced by the city's immigrants, productions such as those of Harrigan and Hart, George M. Cohan, and others used song in narratives that often reflected themes of hope and ambition. New York City itself is the subject or background of many plays and musicals.

Broadway theatre is one of the premier forms of English-language theatre in the world, named after Broadway, the major thoroughfare that crosses Times Square, also sometimes referred to as "The Great White Way". Forty-one venues in Midtown Manhattan's Theatre District, each with at least 500 seats, are classified as Broadway theatres. Performance artists displaying diverse skills are ubiquitous on the streets of Manhattan.

Lincoln Center for the Performing Arts, anchoring Lincoln Square on the Upper West Side of Manhattan, is home to numerous influential arts organizations, including the Metropolitan Opera, New York City Opera, New York Philharmonic, and New York City Ballet, as well as the Vivian Beaumont Theater, the Juilliard School, Jazz at Lincoln Center, and Alice Tully Hall. The Lee Strasberg Theatre and Film Institute is in Union Square, and Tisch School of the Arts is based at New York University, while Central Park SummerStage presents free music concerts in Central Park.

New York City is home to hundreds of cultural institutions and historic sites. Museum Mile is the name for a section of Fifth Avenue running from 82nd to 105th streets on the Upper East Side of Manhattan, in an area sometimes called Upper Carnegie Hill. The Mile, which contains one of the densest displays of culture in the world, is actually three blocks longer than one mile (1.6 km). Ten museums occupy the length of this section of Fifth Avenue. The tenth museum, the Museum for African Art, joined the ensemble in 2009, although its museum at 110th Street, the first new museum constructed on the Mile since the Guggenheim in 1959, opened in late 2012. In addition to other programming, the museums collaborate for the annual Museum Mile Festival, held each year in June, to promote the museums and increase visitation. Many of the world's most lucrative art auctions are held in New York City.

New York City is well known for its street parades, which celebrate a broad array of themes, including holidays, nationalities, human rights, and major league sports team championship victories. The majority of parades are held in Manhattan. The primary orientation of the annual street parades is typically from north to south, marching along major avenues. The annual Macy's Thanksgiving Day Parade is the world's largest parade, beginning alongside Central Park and processing southward to the flagship Macy's Herald Square store; the parade is viewed on telecasts worldwide and draws millions of spectators in person. Other notable parades including the annual New York City St. Patrick's Day Parade in March, the LGBT Pride March in June, the Greenwich Village Halloween Parade in October, and numerous parades commemorating the independence days of many nations. Ticker-tape parades celebrating championships won by sports teams as well as other heroic accomplishments march northward along the Canyon of Heroes on Broadway from Bowling Green to City Hall Park in Lower Manhattan.

Cool, Hidden, and Unusual Things to Do in New York City