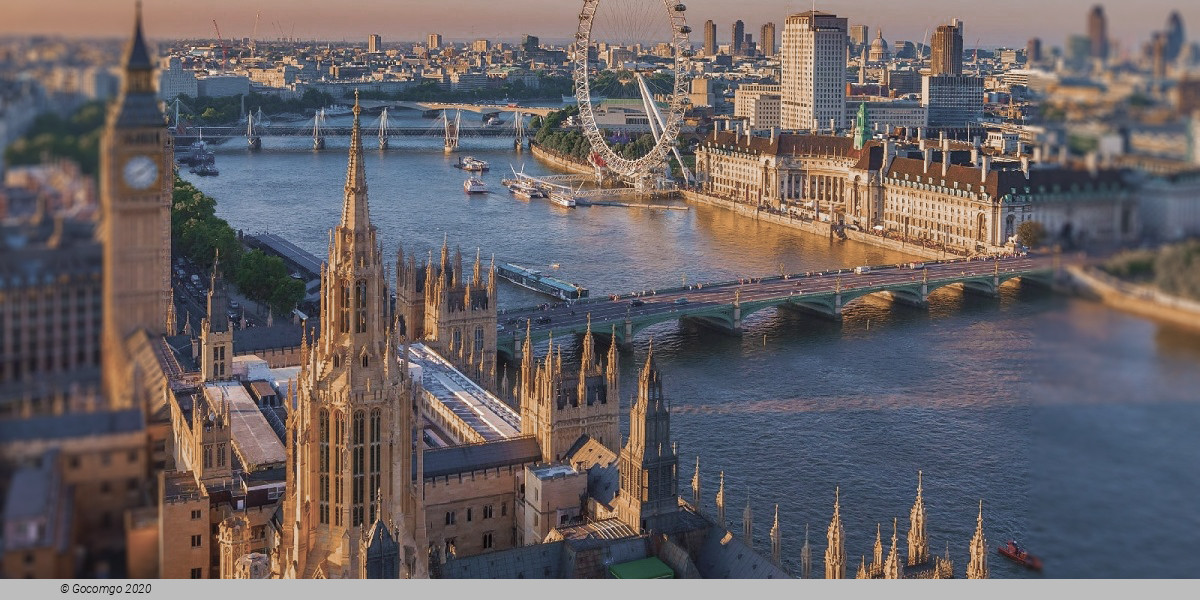 London is the capital and largest city of England and the United Kingdom. It stands on the River Thames in south-east England at the head of a 50-mile estuary down to the North Sea, and has been a major settlement for two millennia. As one of the world's major global cities, London exerts a strong influence on its arts, entertainment, fashion, commerce and finance, education, health care, media, science and technology, tourism, and transport and communications. London is home to many museums, galleries, and other institutions and also is one of the major classical and popular music capitals of the world.

London is one of the major classical and popular music capitals of the world and hosts major music corporations, such as Universal Music Group International and Warner Music Group, and countless bands, musicians and industry professionals. The city is also home to many orchestras and concert halls, such as the Barbican Arts Centre (principal base of the London Symphony Orchestra and the London Symphony Chorus), the Southbank Centre (London Philharmonic Orchestra and the Philharmonia Orchestra), Cadogan Hall (Royal Philharmonic Orchestra) and the Royal Albert Hall (The Proms). The Proms, an eight-week summer season of daily orchestral classical music, ends with the Last Night of the Proms (works by Edward Elgar, Henry Wood, Thomas Arne and Hubert Parry feature at the climax). London's two main opera houses are the Royal Opera House and the London Coliseum (home to the English National Opera). The UK's largest pipe organ is at the Royal Albert Hall. Other significant instruments are in cathedrals and major churches—the church bells of St Clement Danes feature in the 1744 nursery rhyme "Oranges and Lemons", and the lyrics journey through churches and bells of 18th century London. Several conservatoires are within the city: Royal Academy of Music, Royal College of Music, Guildhall School of Music and Drama and Trinity Laban.

The city is home to the original Hard Rock Cafe and the Abbey Road Studios, where The Beatles recorded many of their hits. In the 1960s, 1970s and 1980s, musicians and groups like Elton John, Pink Floyd, David Bowie, Queen, The Kinks, Cliff Richard, The Rolling Stones, The Who, Eric Clapton, Led Zeppelin, Iron Maiden, T. Rex, Fleetwood Mac, Elvis Costello, Dire Straits, Cat Stevens, The Police, The Cure, Madness, Culture Club, Dusty Springfield, Phil Collins, Rod Stewart, Status Quo and Sade, derived their sound from the streets and rhythms of London.

London was instrumental in the development of punk music, with figures such as the Sex Pistols, The Clash and fashion designer Vivienne Westwood all based in the city. Other artists to emerge from the London music scene include George Michael, Kate Bush, Seal, the Pet Shop Boys, Siouxsie and the Banshees, Bush, the Spice Girls, Jamiroquai, Blur, The Prodigy, Gorillaz, Mumford & Sons, Coldplay, Amy Winehouse, Adele, Sam Smith, Ed Sheeran, Ellie Goulding, Dua Lipa and Florence and the Machine. Artists from London with a Caribbean influence include Hot Chocolate, Billy Ocean, Soul II Soul and Eddy Grant, with the latter fusing reggae, soul and samba with rock and pop. London is also a centre for urban music. In particular the genres UK garage, drum and bass, dubstep and grime evolved in the city from the foreign genres of house, hip hop, and reggae, alongside local drum and bass. Music station BBC Radio 1Xtra was set up to support the rise of local urban contemporary music both in London and in the rest of the United Kingdom. The British Phonographic Industry's annual popular music awards, the Brit Awards, are held in London, usually in February.

London is home to many museums, galleries, and other institutions, many of which are free of admission charges and are major tourist attractions as well as playing a research role. The first of these to be established was the British Museum in Bloomsbury, in 1753. Originally containing antiquities, natural history specimens, and the national library, the museum now has 7 million artefacts from around the globe. In 1824, the National Gallery was founded to house the British national collection of Western paintings; this now occupies a prominent position in Trafalgar Square.

The British Library is the second largest library in the world, and the national library of the United Kingdom. There are many other research libraries, including the Wellcome Library and Dana Centre, as well as university libraries, including the British Library of Political and Economic Science at LSE, the Central Library at Imperial, the Maughan Library at King's, and the Senate House Libraries at the University of London.

In the latter half of the 19th century the locale of South Kensington was developed as "Albertopolis", a cultural and scientific quarter. Three major national museums are there: the Victoria and Albert Museum (for the applied arts), the Natural History Museum, and the Science Museum. The National Portrait Gallery was founded in 1856 to house depictions of figures from British history; its holdings now comprise the world's most extensive collection of portraits. The national gallery of British art is at Tate Britain, originally established as an annexe of the National Gallery in 1897. The Tate Gallery, as it was formerly known, also became a major centre for modern art. In 2000, this collection moved to Tate Modern, a new gallery housed in the former Bankside Power Station which is accessed by pedestrians north of the Thames via the Millennium Bridge.

The city is one of the four fashion capitals of the world, and, according to official statistics, is the world's third-busiest film production centre, presents more live comedy than any other city, and has the biggest theatre audience of any city in the world.

Within the City of Westminster in London, the entertainment district of the West End has its focus around Leicester Square, where London and world film premieres are held, and Piccadilly Circus, with its giant electronic advertisements. London's theatre district is here, as are many cinemas, bars, clubs, and restaurants, including the city's Chinatown district (in Soho), and just to the east is Covent Garden, an area housing speciality shops. The city is the home of Andrew Lloyd Webber, whose musicals have dominated West End theatre since the late 20th century. Agatha Christie's The Mousetrap, the world's longest-running play, has been performed in the West End since 1952. The Laurence Olivier Awards–named after Laurence Olivier–are given annually by the Society of London Theatre. The Royal Ballet, English National Ballet, Royal Opera, and English National Opera are based in London and perform at the Royal Opera House, the London Coliseum, Sadler's Wells Theatre, and the Royal Albert Hall, as well as touring the country.

Islington's 1 mile (1.6 km) long Upper Street, extending northwards from Angel, has more bars and restaurants than any other street in the UK. Europe's busiest shopping area is Oxford Street, a shopping street nearly 1 mile (1.6 km) long, making it the longest shopping street in the UK. It is home to vast numbers of retailers and department stores, including Selfridges flagship store. Knightsbridge, home to the equally renowned Harrods department store, lies to the south-west. Opened in 1760 with its flagship store on Regent Street since 1881, Hamleys is the oldest toy store in the world. Madame Tussauds wax museum opened in Baker Street in 1835.

London is home to designers Vivienne Westwood, Galliano, Stella McCartney, Manolo Blahnik, and Jimmy Choo, among others; its renowned art and fashion schools make it one of the four international centres of fashion. London offers a great variety of cuisine as a result of its ethnically diverse population. Gastronomic centres include the Bangladeshi restaurants of Brick Lane and the Chinese restaurants of Chinatown. Chinese takeaways are located throughout London, as are Indian restaurants which provide Indian and Anglo-Indian cuisine. Around 1860, the first fish and chips shop in London (and contender for the oldest) was opened by Joseph Malin, a Jewish immigrant, in Bow, east London. The full English breakfast dates from the Victorian era, and many cafe's in London serve a full English throughout the day. As of 2022 London has five three Michelin star restaurants, including Restaurant Gordon Ramsay in Chelsea. Many hotels in London provide a traditional afternoon tea service, such as the Oscar Wilde Lounge at the Hotel Café Royal in Piccadilly, and a themed tea service is also available, for example an Alice in Wonderland themed afternoon tea served at the Egerton House Hotel, and Charlie and the Chocolate Factory themed afternoon tea at One Aldwych in Covent Garden.

There is a variety of annual events, beginning with the relatively new New Year's Day Parade, a fireworks display at the London Eye; the world's second largest street party, the Notting Hill Carnival, is held on the late August Bank Holiday each year. Traditional parades include November's Lord Mayor's Show, a centuries-old event celebrating the annual appointment of a new Lord Mayor of the City of London with a procession along the streets of the city, and June's Trooping the Colour, a formal military pageant performed by regiments of the Commonwealth and British armies to celebrate the Queen's Official Birthday. The Boishakhi Mela is a Bengali New Year festival celebrated by the British Bangladeshi community. It is the largest open-air Asian festival in Europe. After the Notting Hill Carnival, it is the second-largest street festival in the United Kingdom attracting over 80,000 visitors from across the country. First held in 1862, the RHS Chelsea Flower Show (run by the Royal Horticultural Society) takes place over five days in May every year.