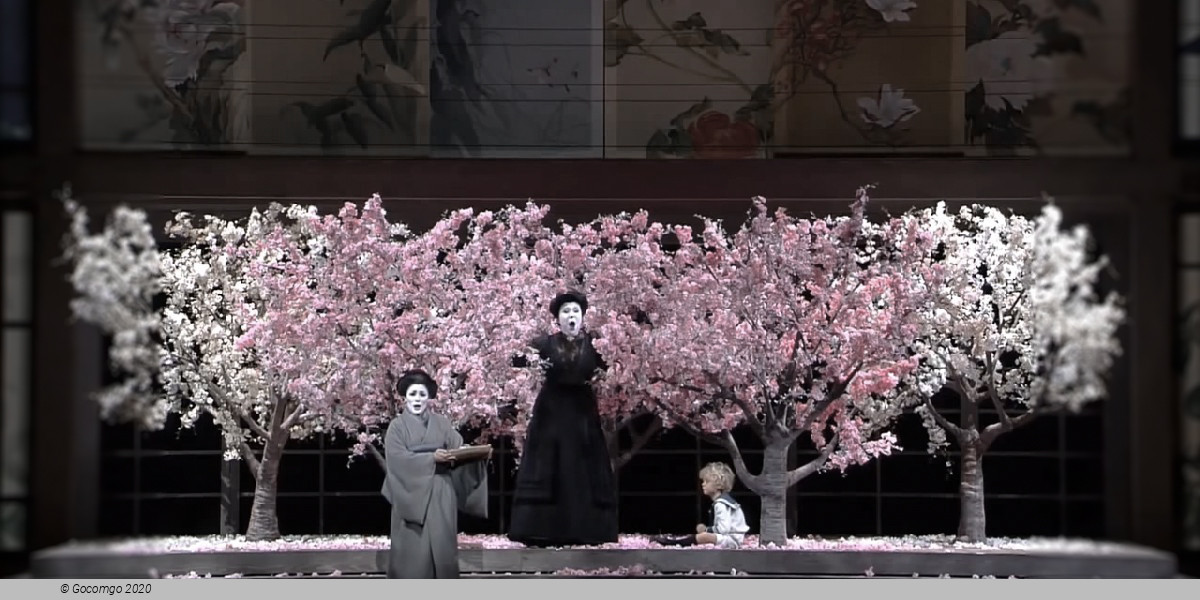 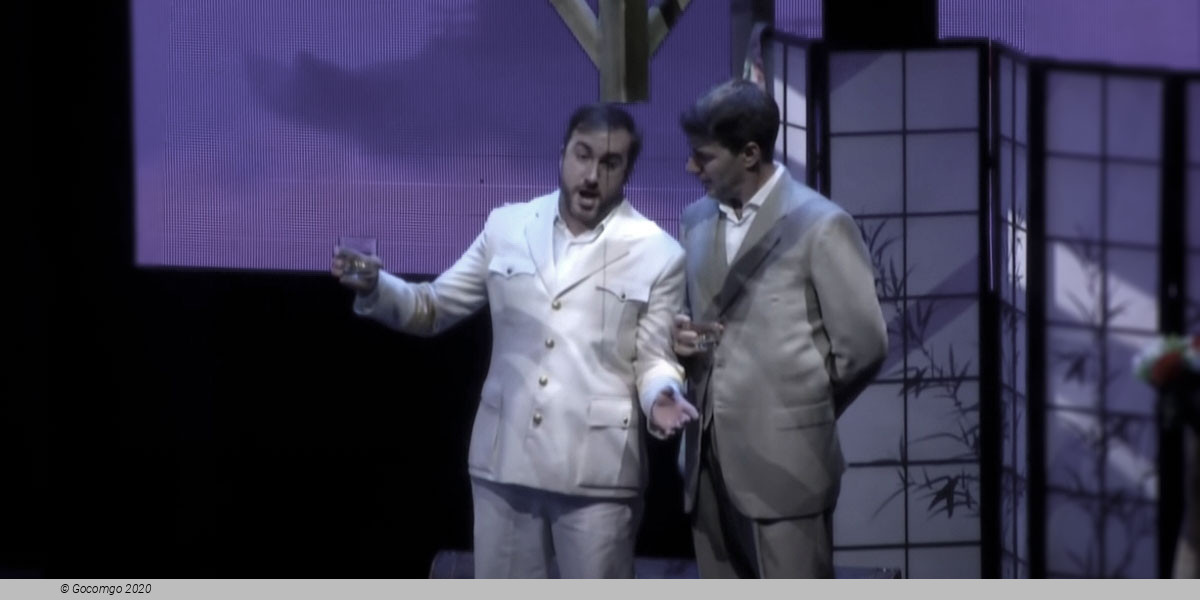 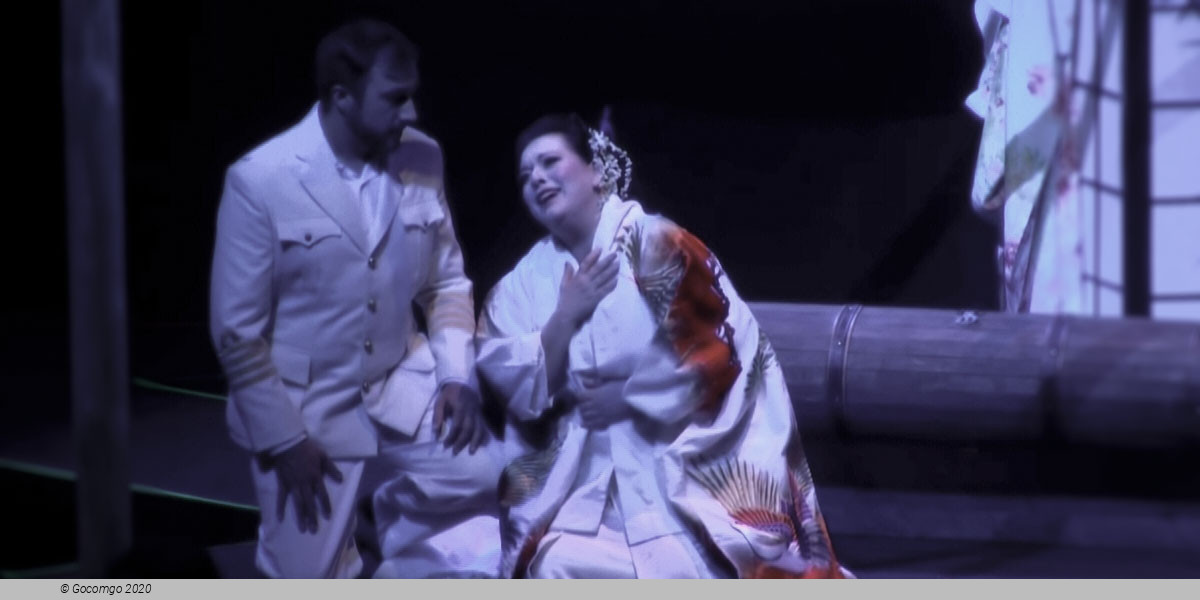 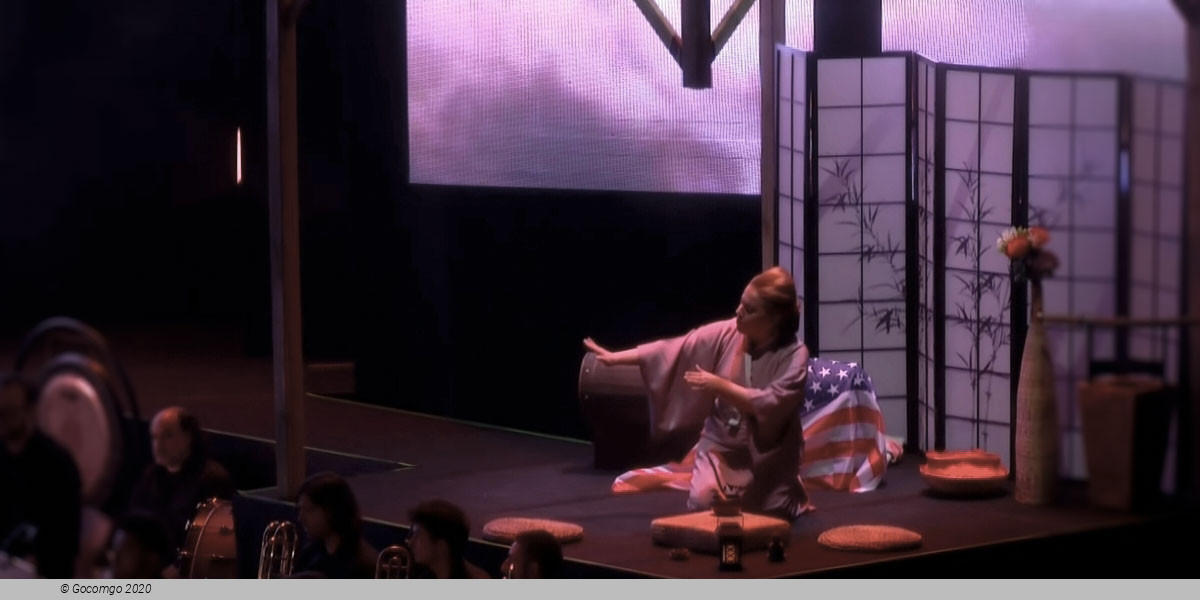 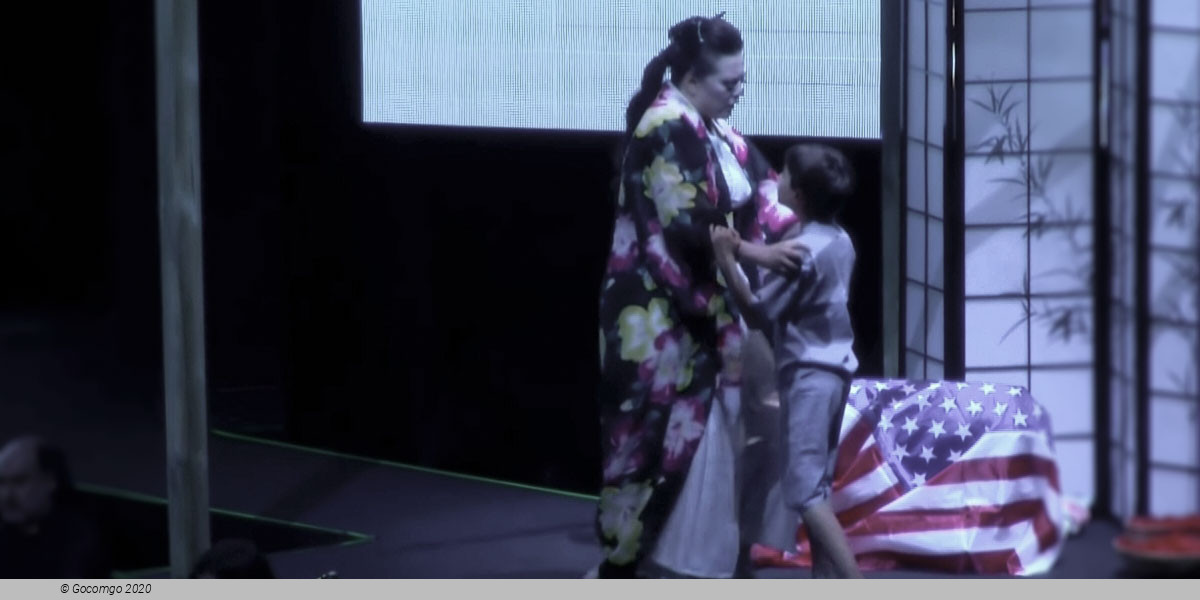 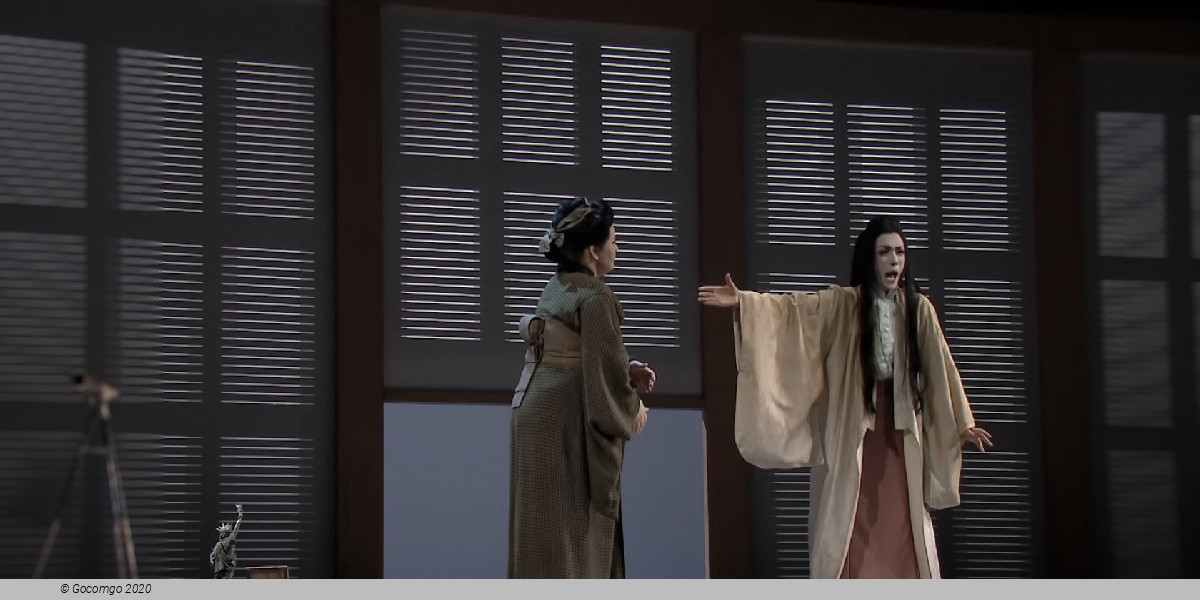 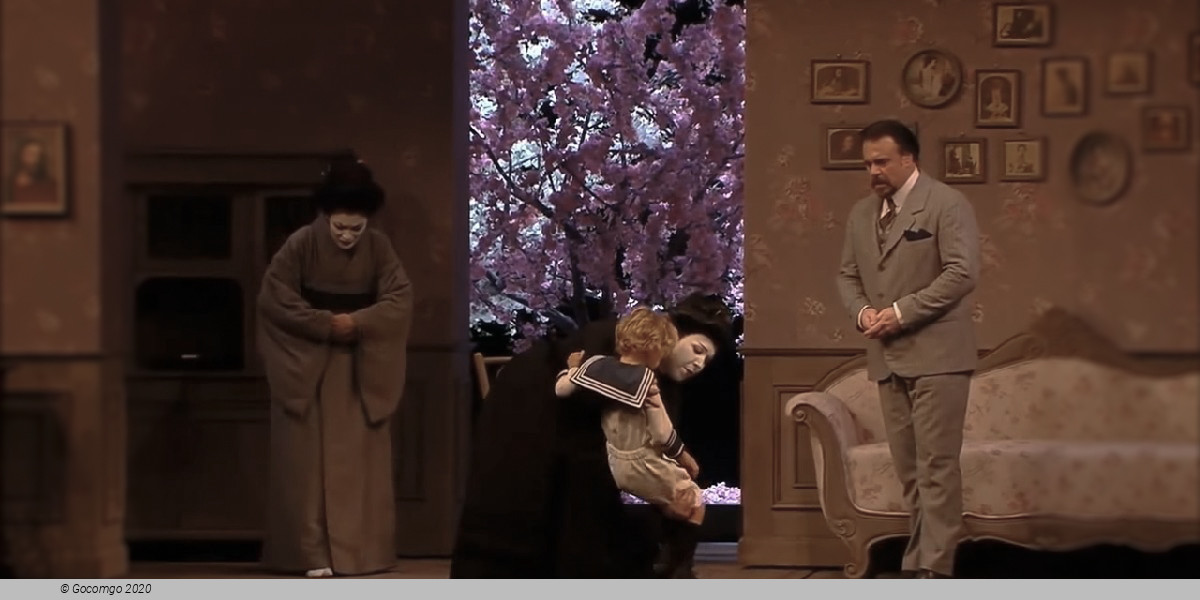 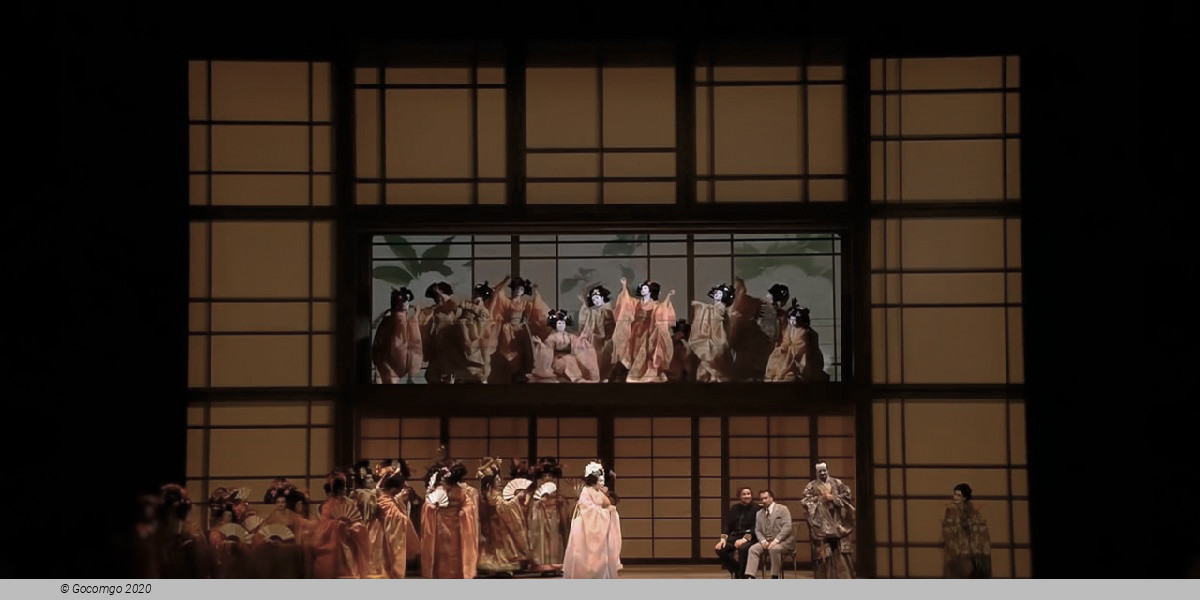 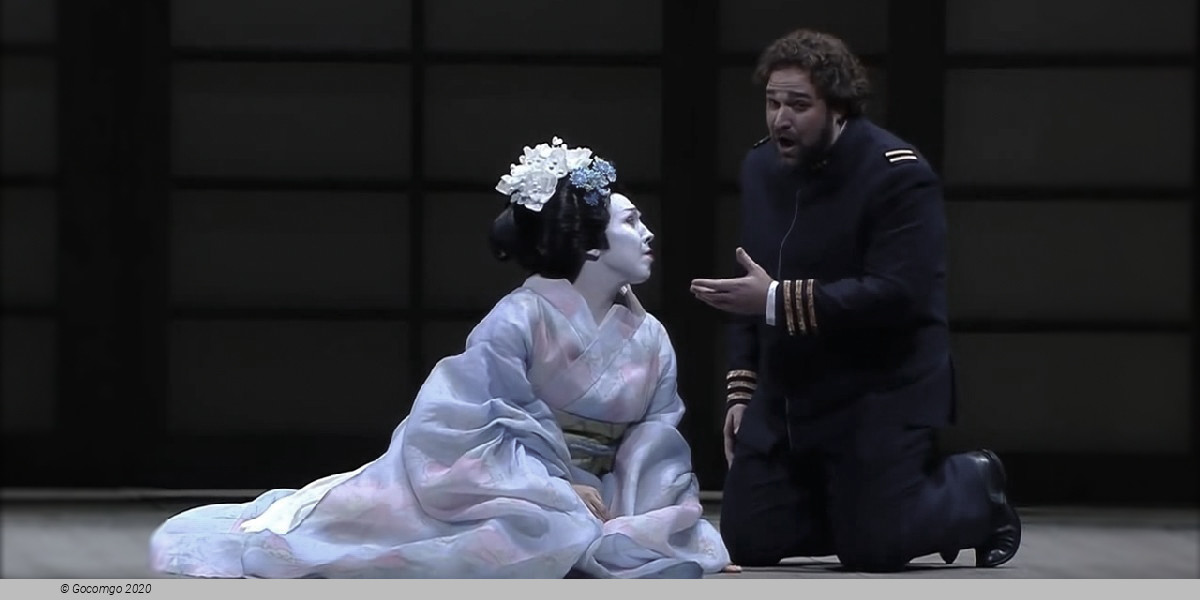 Puccini’s most popular opera, this psychological drama explores the innermost being of the young protagonist while exalting the intense poetry of everything that is small. To a libretto by Illica and Giacosa based on the tale Madame Butterfly by John Luther Long and the Japanese tragedy Madame Butterfly by David Belasco. The set for this production is by the Japanese artist Mariko Mori and was part of the special events section of the 55th International Art Exhibition of the Venice Biennale.

Madama Butterfly is an opera in three acts (originally two) by Giacomo Puccini, with an Italian libretto by Luigi Illica and Giuseppe Giacosa. It is based on the short story "Madame Butterfly" (1898) by John Luther Long, which in turn was based on stories told to Long by his sister Jennie Correll and on the semi-autobiographical 1887 French novel Madame Chrysanthème by Pierre Loti. Long's version was dramatized by David Belasco as the one-act play Madame Butterfly: A Tragedy of Japan, which, after premiering in New York in 1900, moved to London, where Puccini saw it in the summer of that year.

Teatro La Fenice is an opera house in Venice. It is one of "the most famous and renowned landmarks in the history of Italian theatre", and in the history of opera as a whole. Especially in the 19th century, La Fenice became the site of many famous operatic premieres at which the works of several of the four major bel canto era composers – Rossini, Bellini, Donizetti, Verdi – were performed.

Its name reflects its role in permitting an opera company to "rise from the ashes" despite losing the use of three theatres to fire, the first in 1774 after the city's leading house was destroyed and rebuilt but not opened until 1792; the second fire came in 1836, but rebuilding was completed within a year. However, the third fire was the result of arson. It destroyed the house in 1996 leaving only the exterior walls, but it was rebuilt and re-opened in November 2004. In order to celebrate this event the tradition of the Venice New Year's Concert started.

Seven old theaters were active in Venice at the end of the eighteenth century, two for the production of plays and the others for music. The grandest of these was the Teatro San Benedetto, which stood on the site currently occupied by the Rossini cinema. Built by the Grimani family in 1755, it was subsequently assigned to the Nobile Società di Palchettisti (Noble Association of Box-holders). However, following a judicial ruling in 1787, this association was expelled and forced to give up the opera house to the noble Venier family, the owners of the land on which it was built. The association immediately proposed building a larger and more sumptuous opera house than the one it had lost, which would become the symbol of their changing fortunes and their capacity for ′rebirth′. It was therefore to be called La Fenice, like the mythical, immortal bird able to rise out of its own ashes, to symbolize the association's splendid rebirth after its misfortunes.

The piece of land between Contrada Santa Maria Zobenigo and Contrada Sant'Angelo was bought for the purpose in 1790 and the private houses on it were demolished. A competition was then announced for the design of the opera house, and the committee of experts selected the work of the architect Giannantonio Selva from the 29 plans submitted. Work began in 1791 and was completed just 18 months later, in April 1792. La Fenice immediately made its mark as one of the leading opera houses, noted in Italy and Europe both for the high artistic quality of its work and the splendour of its building. But, almost as if the name were the bearer of bad omens, on the night of 13 December 1836 the opera house was devastated by a first fire caused by a recently installed Austrian heater. The newspapers said it took three days and three nights to put out the fire and that various hotspots were still smouldering among the debris 18 days later. The flames entirely destroyed the house, and only the foyer and the Sale Apollinee were saved. The association decided to proceed with its immediate reconstruction. It appointed the architect Giambattista Meduna and his engineer brother Tommaso to carry out the work, while Tranquillo Orsi was responsible for the decorations. The work began in February 1837 and performances were temporarily staged in the Teatro Apollo (previously the San Luca, now Goldoni).

Everything was completed in record time. By the evening of 26 December of the same year, the new opera house, reborn in the new artistic style of the age, was opened to the public. The speed of the work, however, led to urgent restoration works to the framework being required as early as 1854 and, again under the direction of Giambattista Meduna, the house was redecorated in a style that remained unchanged until 1996. On 23 July 1935, the box-holder owners ceded their share in the opera house to the Comune di Venezia, so it went from private to public ownership, and in 1937-8 part of the building was subject to further major restorations and alterations by engineer Eugenio Miozzi. On the night of 29 January 1996, during a period of closure for restoration works, a second fire – as the Myth said – this time arson, completely destroyed the house and most of the Sale Apollinee. Once again La Fenice rose again, faithfully reconstructed to a plan by the architect Aldo Rossi, and was reopened on 14 December 2003.

First theatre
In 1774, the Teatro San Benedetto, which had been Venice's leading opera house for more than forty years, burned to the ground. By 1789, with interest from a number of wealthy opera lovers who wanted a spectacular new house, "a carefully defined competition" was organized to find a suitable architect. It was won by Gianantonio Selva who proposed a neoclassical style building with 170 identical boxes in tiers in a traditional horseshoe shaped auditorium, which had been the favoured style since it was introduced as early as 1642 in Venice. The house would face on one side a campo, or small plaza, and on the other a canal, with an entrance which gave direct access backstage and into the theatre.

However, the process was not without controversy especially in regard to the aesthetics of the building. Some thirty responses were received and, as Romanelli accounts, Selva's was designated as the design to be constructed, the actual award for best design went to his chief rival, Pietro Bianchi. However, Selva's design and finished opera house appears to have been of high quality and the one best suited to the limitations of the physical space it was obliged to inhabit.

Construction began in June 1790, and by May 1792 the theatre was completed. It was named "La Fenice", in reference to the company's survival, first of the fire, then of the loss of its former quarters. La Fenice was inaugurated on 16 May 1792, with an opera by Giovanni Paisiello entitled I giuochi d'Agrigento set to a libretto by Alessandro Pepoli.

But no sooner had the opera house been rebuilt than a legal dispute broke out between the company managing it and the owners, the Venier family. The issue was decided in favor of the Veniers.

At the beginning of the 19th century, La Fenice acquired a European reputation. Rossini mounted two major productions there: Tancredi in 1813 and Semiramide in 1823. Two of Bellini's operas were given their premieres there: I Capuleti e i Montecchi in March 1830 and Beatrice di Tenda in March 1833. Donizetti, fresh from his triumphs at La Scala in Milan and at the Teatro di San Carlo in Naples, returned to Venice in 1836 with his Belisario, after an absence of seventeen years.

Second theatre
In December 1836, disaster struck again when the theatre was destroyed by fire. However, it was quickly rebuilt with a design provided by the architect-engineer team of the brothers Tommaso and Giovanni Battista Meduna. The interior displays a late-Empire luxury of gilt decorations, plushy extravagance and stucco. La Fenice once again rose from its ashes to open its doors on the evening of 26 December 1837.

Giuseppe Verdi's association with La Fenice began in 1844, with the premiere performance of Ernani during the carnival season. Over the next 13 years, the premieres of Attila, Rigoletto, La traviata, and Simon Boccanegra took place there.

During the First World War, La Fenice was closed, but it reopened to become the scene of much activity, attracting many of the world's greatest singers and conductors. In 1930, the Venice Biennale initiated the First International Festival of Contemporary Music, which brought such composers as Stravinsky and Britten, and more recently Berio, Nono, and Bussotti, to write for La Fenice.

On 29 January 1996, La Fenice was completely destroyed by fire. Only its acoustics were preserved, since Lamberto Tronchin, an Italian acoustician, had measured the acoustics two months earlier.

Arson was immediately suspected. In March 2001, a court in Venice found two electricians, Enrico Carella and his cousin Massimiliano Marchetti, guilty of setting the fire. They appeared to have set the building ablaze because their company was facing heavy fines over delays in repair work in which they were engaged. Carella, the company's owner, disappeared after a final appeal was turned down. He had been sentenced to seven years in prison. Marchetti surrendered and served a six-year sentence. Ultimately, Carella was arrested in February 2007 at the Mexico-Belize border, was extradited to Italy, and was released on day parole after serving 16 months.

Present theatre
After various delays, reconstruction began in earnest in 2001. In 650 days, a team of 200 plasterers, artists, woodworkers, and other craftsmen succeeded in recreating the ambiance of the old theatre, at a cost of some €90 million. As Gillian Price notes, "This time round, thanks to an enlightened project by late Italian architect Aldo Rossi and the motto 'how it was, where it was', it has been fitted out with extra rehearsal areas and state-of-the-art stage equipment, while the seating capacity has been increased from 840 to 1000."

La Fenice was rebuilt in 19th-century style on the basis of a design by architect Aldo Rossi who, in order to obtain details of its design, used still photographs from the opening scenes of Luchino Visconti's film Senso (1954), which had been filmed in the house. La Fenice reopened on 14 December 2003 with an inaugural concert of Beethoven, Wagner, and Stravinsky. The first staged opera was a production of La traviata, in November 2004.

Critical response to the rebuilt La Fenice was mixed. The music critic of the paper Il Tempo, Enrico Cavalotti, was satisfied. He found the colors a bit bright but the sound good and compact. However, for his colleague Dino Villatico of the La Repubblica, the acoustics of the new hall lacked resonance, and the colours were painfully bright. He found it "kitsch, a fake imitation of the past". He said that "the city should have had the nerve to build a completely new theater; Venice betrayed its innovative past by ignoring it".