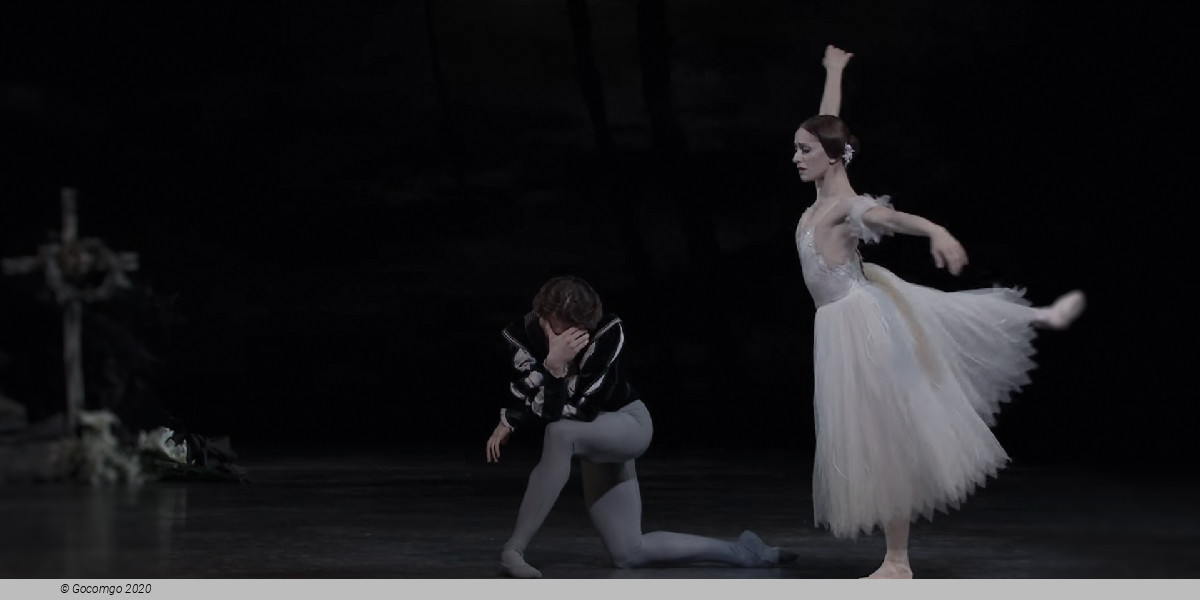 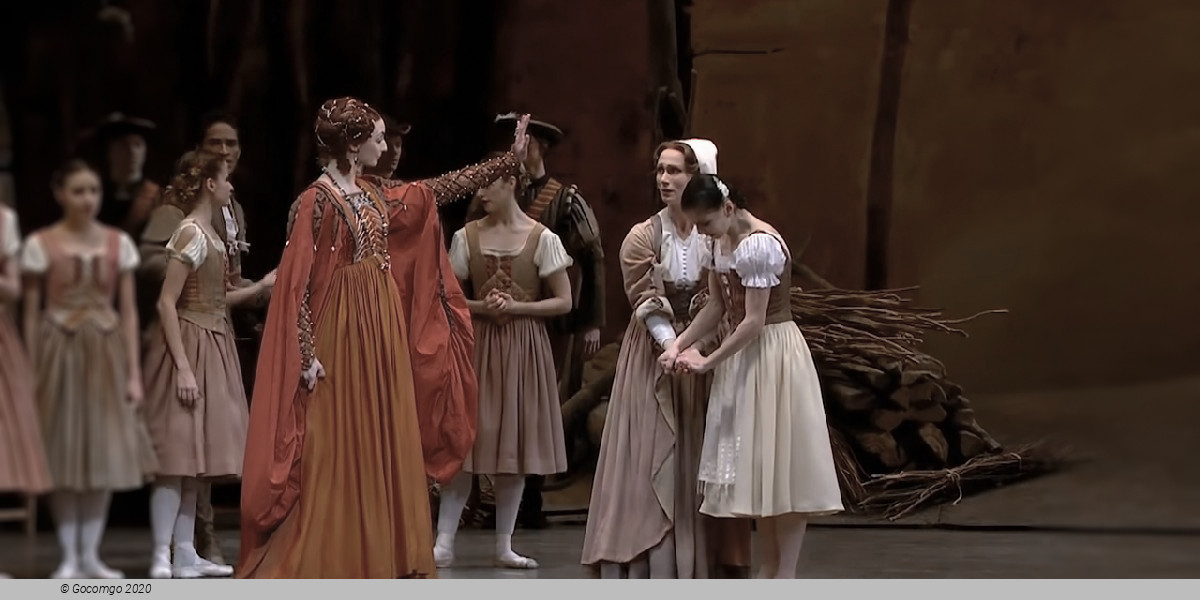 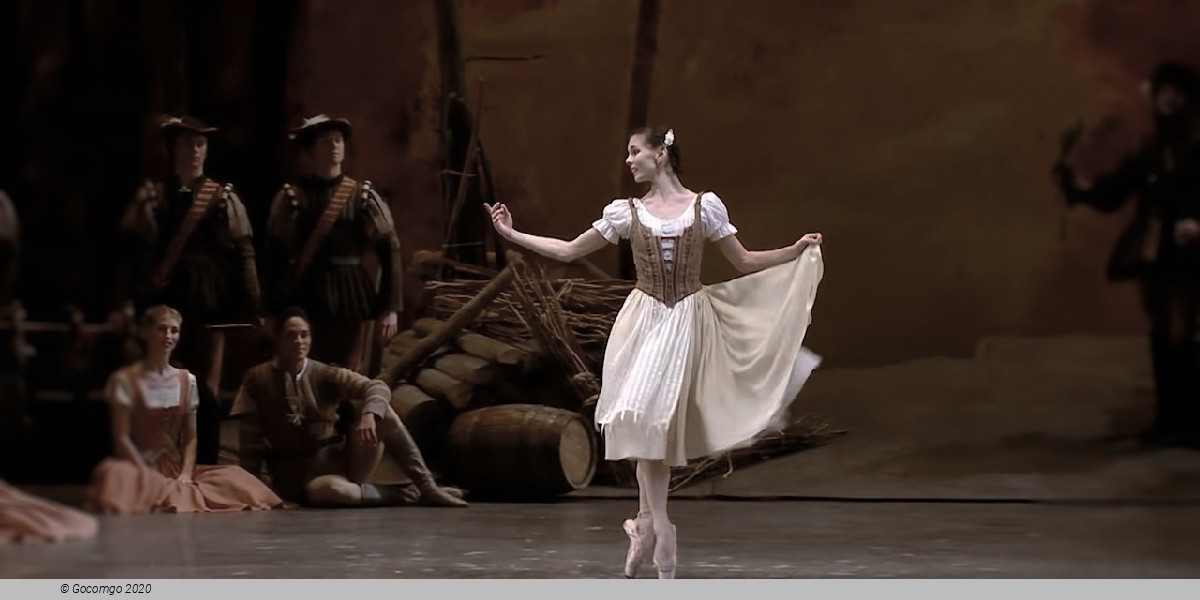 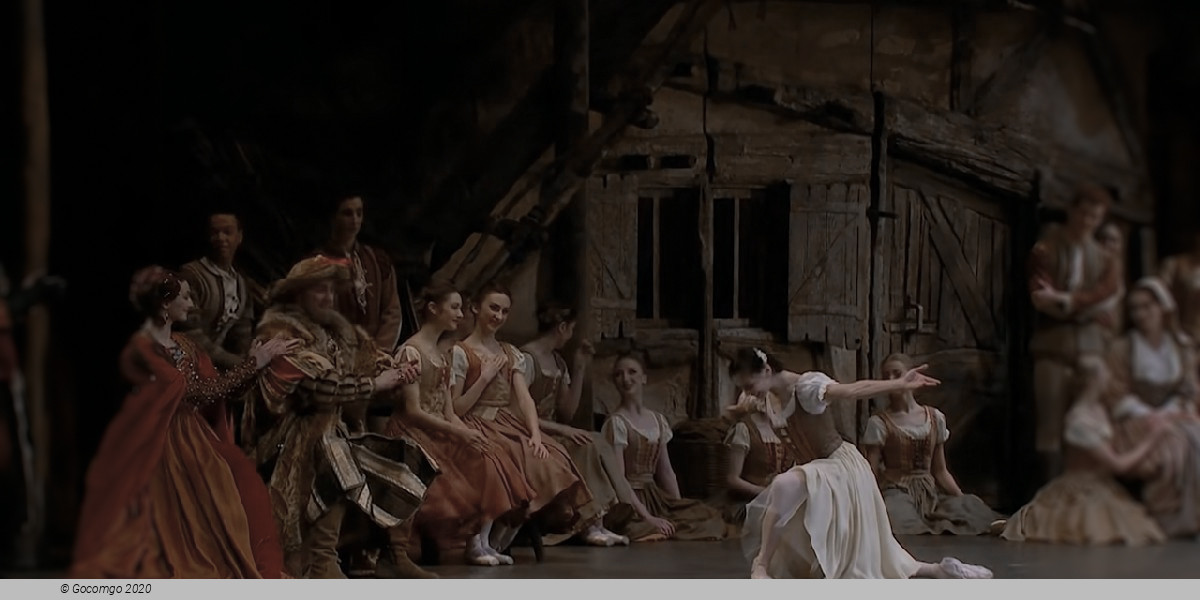 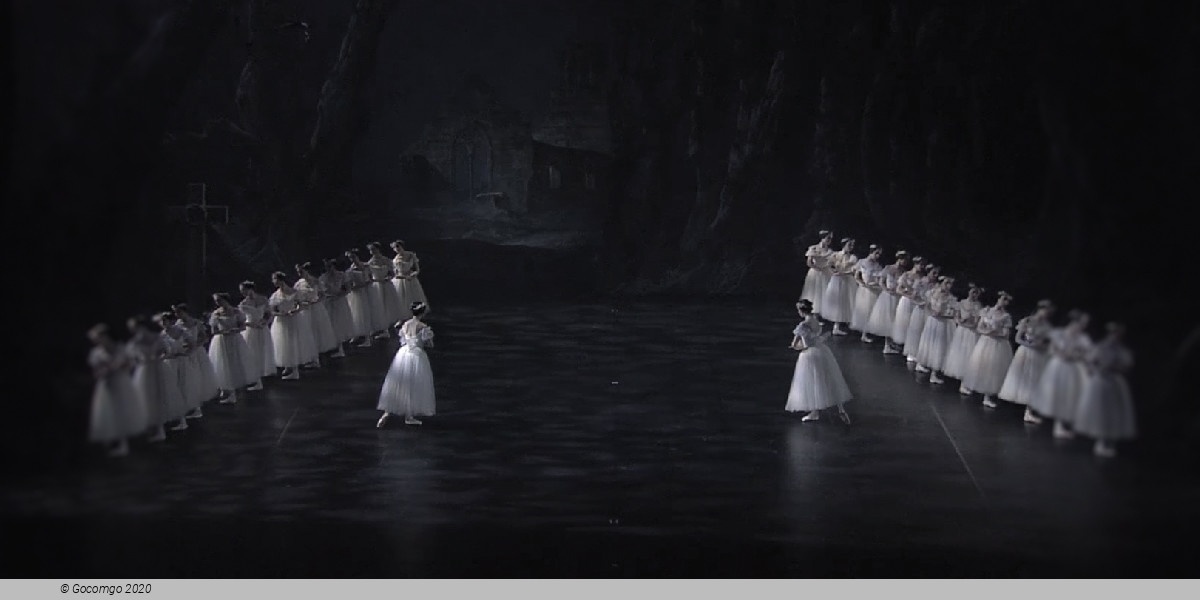 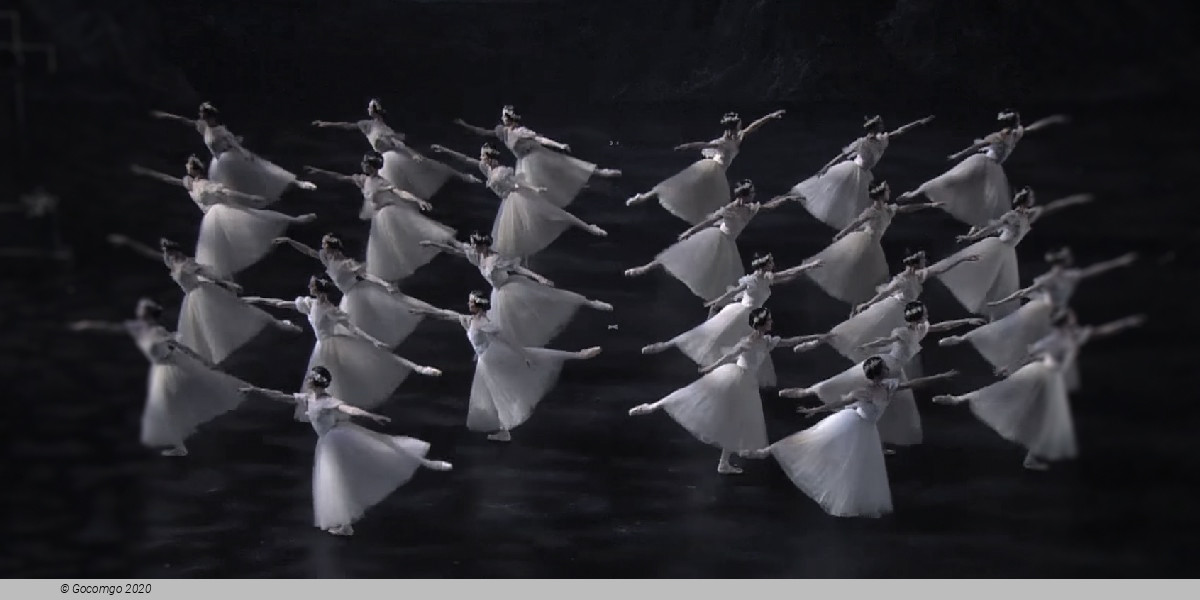 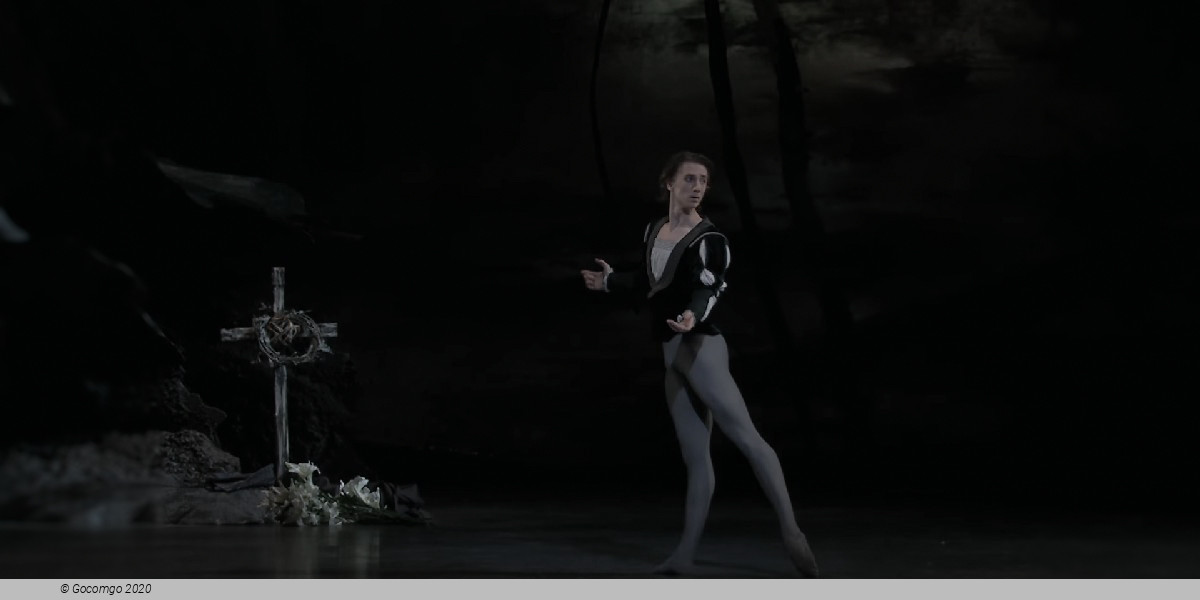 A heartbreaking, forbidden love story With scenes so beautiful they take your breath away and love so strong it conquers death. You won’t want to miss this gripping ballet with the Norwegian National Ballet!

First love, betrayal, grief and forgiveness – Giselle is a rollercoaster of a romance. “Everlasting beauty on the Main Stage,” wrote Aftenposten in 2020.

Life-and-death dance
Giselle falls in love with Albrecht, who hides the fact that he is actually engaged to Bathilde. Giselle loves Albrecht so intensely that she dies of madness on discovering his betrayal. Albrecht repents and visits Giselle’s grave, where he is haunted by the Wilis – vengeful ghosts of jilted brides who drive young men to dance to death. Is Giselle’s love strong enough to save him?

The ultimate romantic ballet
Romantic ballet as a genre arose in the 1800s, with a rural first act, followed by a ‘white’ second act. During the white act, the female dancers wear only white costumes and the act usually includes supernatural elements and insanity.

Giselle is the quintessential romantic ballet. We experience not only a madness scene that requires considerable dramatic skills on the part of the ballerina, but also the supernatural Wilis in the second act.

Dream role for ballerinas
“Giselle is the dream role for a ballerina. Exposing the soul and spirit is no easy task. As the wind, she never stops moving,” says former prima ballerina Cynthia Harvey, who has staged Giselle for the Norwegian National Ballet.

After the premiere in Paris in 1841, all major ballet companies have created their own version of Giselle. Harvey based hers on the original choreography by Jean Coralli and Jules Perrot to Adolphe Adam’s evocative music.

Perrot and Carlotta Grisi were lovers and, consequently, Perrot designed all of her dances and pantomime. Everyone in the Paris dance world knew that Perrot had created Grisi's dances and Coralli admitted it, but Perrot was given no official credit in the printed materials such as posters and programs. This was most likely done to prevent Perrot from collecting royalties on the ballet. Perrot liked bold touches and planned several rapid aerial swoops on wires in Act II for Giselle. Grisi was afraid of these swoops, therefore a stage hand was brought in to test them. He crashed face-first into the scenery and the swoops were dropped.

The balletomanes of Paris became very excited as the opening night of Giselle approached. News reports kept their interest alive. Some reports said that Grisi has had an accident whilst other reports indicated that the conductor was ill with a tumor. Still others said that the stage hands feared for their safety.

Hopes that the ballet would be ready in May were dashed and the opening night was postponed several times. Grisi was absent for a few days and her return was delayed to protect her health. Lighting, trapdoors, and scene changes needed further rehearsals. Cuts were made in Grisi's role to spare the dancer's health. Instead of returning to her tomb at the end of the ballet, it was decided that she would be placed on a bed of flowers and sink slowly into the earth. This touch preserved the romantic mood of the Act II finale.

At last, on Monday, 28 June 1841 the curtain rose on Giselle at the Salle Le Peletier. Grisi danced Giselle with Lucien Petipa as her lover Albrecht, Jean Coralli as the gamekeeper Hilarion, and Adèle Dumilâtre as Myrtha, the Queen of the Wilis. Typical of the theatrical practices of the time, Giselle was preceded by an excerpt from another production—in this case, the third act of Rossini's opera, Mosè in Egitto. In 1844 Marie Guy-Stéphan made his first appearance in a role for the first production of Giselle, who performed in numerous works by Pepita.

In spite of the chief machinist shouting orders to his crew that could be heard by the audience, Giselle was a great success. Grisi was a sensation. Ballet-goers regarded her as another Marie Taglioni, the greatest ballerina of the period.

Giselle is a romantic ballet in two acts. It was first performed by the Ballet du Théâtre de l'Académie Royale de Musique at the Salle Le Peletier in Paris, France on 28 June 1841, with Italian ballerina Carlotta Grisi as Giselle. The ballet was an unqualified triumph. Giselle became hugely popular and was staged at once across Europe, Russia, and the United States. The traditional choreography that has been passed down to the present day derives primarily from the revivals staged by Marius Petipa during the late 19th and early 20th centuries for the Imperial Ballet in St. Petersburg.

The Oslo Opera House is the home of The Norwegian National Opera and Ballet, and the national opera theatre in Norway. The building is situated in the Bjørvika neighbourhood of central Oslo, at the head of the Oslofjord. It is operated by Statsbygg, the government agency which manages property for the Norwegian government. The structure contains 1,100 rooms in a total area of 38,500 m2 (414,000 sq ft). The main auditorium seats 1,364 and two other performance spaces can seat 200 and 400. The main stage is 16 m (52 ft) wide and 40 m (130 ft) deep. The angled exterior surfaces of the building are covered with marble from Carrara, Italy and white granite and make it appear to rise from the water. It is the largest cultural building constructed in Norway since Nidarosdomen was completed circa 1300.

In 1999, after a long national debate, the Norwegian legislature decided to construct a new opera house in the city. A design competition was held and, of the 350 entries received, the judges chose that of Snøhetta. Construction started in 2003 and was completed in 2007, ahead of schedule and 300 million NOK (~US$52 million) under its budget of 4.4 billion NOK (~US$760 million). The gala opening on 12 April 2008 was attended by His Majesty King Harald, Queen Margrethe II of Denmark and President Tarja Halonen of Finland and other leaders. During the first year of operation, 1.3 million people passed through the building's doors.

The Opera House won the culture award at the World Architecture Festival in Barcelona in October 2008 and the 2009 European Union Prize for Contemporary Architecture.

The roof of the building angles to ground level, creating a large plaza that invites pedestrians to walk up and enjoy the panoramic views of Oslo. While much of the building is covered in white granite and La Facciata, a white Italian carrara marble, the stage tower is clad in white aluminium, in a design by Løvaas & Wagle that evokes old weaving patterns.

The lobby is surrounded by 15 m (49 ft) tall windows with minimal framing and special glass that allows maximum views of the water. The roof is supported by thin angled columns also designed not to interfere with views.

Interior surfaces are covered in oak to bring warmth to spaces in contrast to the coolness of the white exterior. The main auditorium is a horseshoe shape and illuminated by an oval chandelier containing 5,800 handmade crystals. Seats include monitors for the electronic libretto system, allowing audiences to follow opera libretti in Norwegian and English in addition to the original language.

Several art projects were commissioned for the interior and exterior of the Opera House. The most notable is She Lies, a sculpture constructed of stainless steel and glass panels by Monica Bonvicini. It is permanently installed on a concrete platform in the fjord adjacent to Opera House and floats on the water moving in response to tides and wind to create an ever-changing face to viewers. The work was unveiled by Her Majesty Queen Sonja on 11 May 2010.

A perforated wall panel which covers roof supports in the lobby was designed by Olafur Eliasson. It features hexagonal opening and is illuminated from below and behind to create the illusion of melting ice. Other artists involved in the construction include Kristian Blystad, Jorunn Sannes and Kalle Grude, who designed the shape of the pavers on the forecourt and roof; Bodil Furu and Trine Lise Nedreaas, who created a film and video project; Marte Aas, Talleiv Taro Manum, Tom Sandberg, Gerd Tinglum and Nina Witoszek Fitzpatrick, who created the art book Site Seeing; and Linus Elmes and Ludvig Löfgren, who created the foundation stone.

The main stage curtain is the work of Pae White who designed it to look like crumpled aluminum foil. White scanned a crumpled piece of foil into a computer which translated the information to a loom that wove the curtain from wool, cotton and polyester to create a three-dimensional effect. The curtain was manufactured by the German-based theatrical equipment company Gerriets GmbH. The finished curtain measures 74 ft (23 m) wide and 36 ft (11 m) and weighs 1,100 lb (500 kg).