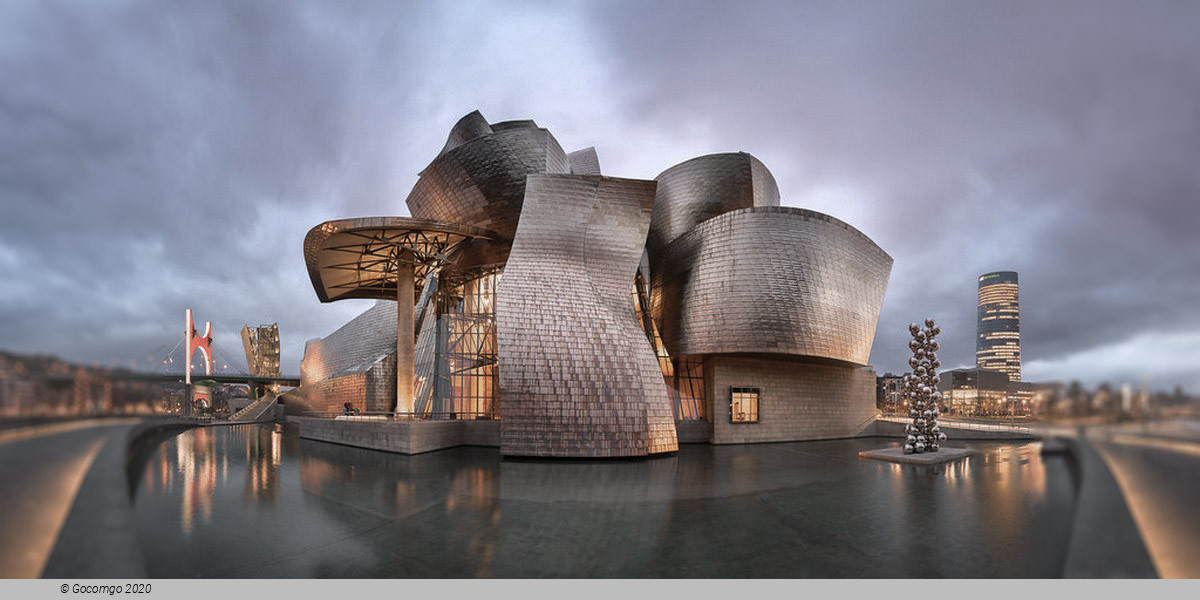 Remains of an ancient settlement were found on the top of Mount Malmasín, dating from around the 3rd or 2nd century BC. Burial sites were also found on mounts Avril and Artxanda, dated 6,000 years old. Some authors identify the old settlement of Bilbao as Amanun Portus, cited by Pliny the Elder, or with Flaviobriga, by Ptolemy.

Ancient walls, which date from around the 11th century, have been discovered below the Church of San Antón. Bilbao was one of the first towns founded in the fourteenth century, during a period in which approximately three-quarters of the Biscayan cities were developed, among them Portugalete in 1323, Ondarroa in 1327, Lekeitio in 1335, and Mungia and Larrabetzu in 1376. Diego López V de Haro, then third Lord of Biscay, founded Bilbao through a municipal charter dated in Valladolid on 15 June 1300 and confirmed by King Ferdinand IV of Castile in Burgos, on 4 January 1301. Diego López established the new town on the right bank of the Nervión river, on the grounds of the elizate of Begoña and granted it the fuero of Logroño, a compilation of rights and privileges that would prove fundamental to its later development.

In 1310 María Díaz I de Haro, niece of Diego López V and Lady of Biscay, grants a new municipal charter to the city, which extends its commercial privileges even further, transforming the city in a mandatory stop for all the trade coming from Castile towards the sea. This second charter established that the road from Orduña to Bermeo, at the time the most important trade route in the lordship, had to traverse the San Antón Bridge in Bilbao instead of the pass in Etxebarri, as it did until then. This strengthened the position of Bilbao as a trading post, in detriment of Bermeo, city which until then had acted as the main port of the territory. In addition, Bilbao was granted exclusive rights to all trade between the city and Las Arenas. In 1372, John I of Castile strengthened even more the city's position by naming Bilbao a free port and granting it special privileges concerning the trade of iron. This caused Bilbao to become an important port, particularly due to its trade with Flanders and Great Britain.

In 1443 the Church of Saint Anthony the Great was enshrined, having been built in the place of an old alcázar. Still today the church is one of the oldest extant buildings of the city. On 5 September 1483, the Queen Isabella I of Castile traveled to Bilbao to swear fealty to the fueros of Biscay. Her husband, Ferdinand II of Aragon had already done so in 1476 in Gernika.

On 21 June 1511, Queen Joanna of Castile ordered the creation of the Consulate of the Sea of Bilbao. This would become the most influential institution of the borough for centuries, and would claim jurisdiction over the estuary, improving its infrastructure. Under the Consulate's control, the port of Bilbao became one of the most important of the kingdom. The first printing-press was brought to the town in 1577. Here in 1596, the first book in the Basque language was edited, entitled Doctrina Christiana en Romance y Bascuence by Dr. Betolaza.

In 1602 Bilbao was made the capital of Biscay, a title previously held by Bermeo. Around 1631, the city was the scenario of a series of revolts against the increased taxation on salt, which had been ordered by the Crown, an event locally known as the "Machinada of the salt". The revolt ended with the execution of several of its leaders. The city had seen a continuous increase of its wealth, especially after the discovery of extensive iron deposits in the surrounding mountains, and by the end of the century it managed to overcome the economic crises that affected the rest of the kingdom, thanks in part to the increased trading of wool (which now used the port of Bilbao instead of the one in Santander), and to the iron ore and its commerce with England and the Netherlands.

The French invasion of Spain saw the occupation of several Basque cities, but Bilbao was not among them. The first open uprising against Napoleonic rule took place on 6 August 1808, a month after the Battle of Bailén. French troops sieged and sacked the city, alongside the neighbouring towns of Deusto and Begoña on 16 August. Beginning on February 1810, the city was under the command of Pierre Thouvenot, general of the French army and Baron of the Empire, who had become the head of the Military Government of Vizcaya, which included the three Basque provinces. Thouvenot intended to move forward with the plan of total annexation of the Basque provinces into France, but the Peninsular War and ultimately the Battle of Vitoria made those plans impossible.

The Basque Country was one of the main sites of battles during the First Carlist War, a civil war between supporters of the Spanish regent Maria Christina, known as liberals, and those of the late king's brother Carlos of Borbón, known as Carlists. The Carlists were particularly focused on capturing Bilbao, a liberal and economic bastion in northern Spain. The Carlist general Tomás de Zumalacárregui tried to take the city during the Siege of Bilbao of 1835, but he was wounded during a battle near Begoña and died some time after in the town of Zegama. The next year, the city resisted a second siege during which the liberal general Baldomero Espartero defeated the Carlists in the Battle of Luchana. The city was untouched by the Second Carlist War, which took place mostly in Catalonia, but was again an important scenario during the Third Carlist War; in April 1874 the city suffered a third siege which lasted two months.

Despite the warfare, Bilbao prospered during the nineteenth and twentieth centuries, when it rose as the economic centre of the Basque Country. It was during this time that the railway first arrived to the city and the Bank of Bilbao (which later would go on to become the BBVA) was founded, as well as the Bilbao Stock Exchange. Steelmaking industries flourished with the creation of many new factories, including the Santa Ana de Bolueta and the Altos Hornos de Vizcaya in 1902. The city was modernised with new avenues and walkways, as well as with new modern buildings such as the City Hall building, the Basurto Hospital and the Arriaga Theatre. The population increased dramatically, from 11,000 in 1880 to 80,000 in 1900. Social movements also arose, notably Basque nationalism under Sabino Arana, which in the subsequent decades would grow to become the Basque Nationalist Party.

The Spanish Civil War in Bilbao started with a number of small uprisings suppressed by the Republican forces. On 31 August 1936, the city suffered its first bombing, with a series of air bombs dropped by Nationalist airplanes. In September, the Nationalists distributed pamphlets threatening further bombing if the city did not give up, which finally took place on 25 September when German planes, in coordination with Francoist forces, dropped at least a hundred bombs on the city. In May 1937, the Nationalist army besieged the town. The battle lasted until 19 June of that year, when Lieutenant Colonel Putz was ordered to destroy all bridges over the estuary, and the troops of the 5th Brigade took the borough from the mountains Malmasin, Pagasarri, and Arnotegi.

With the war over, Bilbao returned to its industrial development, accompanied by steady population growth. In the 1940s, the city was rebuilt, starting with the bridges and by 1948, the first commercial flight took off from the local airport. Over the next decade, there was a revival of the iron industry, which became a strategic industrial sector in Spain, as a consequence of the economic model promoted by Francoism. The city received migrants from other Spanish regions looking to work in the iron industry. The demand for housing outstripped supply, and workers built slums on the hillsides. It was in this context that the first social movements arose and the strike of the Euskalduna shipyard in 1947 was the first one to take place during the Francoist dictatorship. In this environment of social repression, on 31 July 1959 the separatist organisation ETA was created from Basque nationalist movements. During the 1960s the city was the scenario of several urban projects, with the creation of new neighbourhoods like Otxarkoaga and the motorway to the French border. In June 1968 the University of Bilbao, the first public university, was established. It would later be integrated into the University of the Basque Country.

After the end of Francoist Spain and the establishment of a constitutional monarchy, in a process known in Spain as the transition, Bilbao was able to hold democratic elections again. This time Basque nationalists rose to power. With the approval of the Statute of Autonomy of the Basque Country in 1979, Vitoria-Gasteiz was elected the seat of the government and therefore the de facto capital of the Basque Autonomous Community, although Bilbao was larger and more powerful economically. In the 1980s, several factors such as labor demands and the arrival of cheap labor from abroad led to a devastating industrial crisis.

On 26 August 1983 during the celebration of the local festivities known as Aste Nagusia, the estuary overflowed up to five metres in some areas due to the continuous raining, killing two people and causing important destructions in the city's infrastructure, with a total economic cost that reached 60,000 million pesetas (around 360 million Euro).

Since the mid-1990s, Bilbao has been in a process of deindustrialization and transition to a service economy, supported by investment in infrastructure and urban renewal, starting with the opening of the Bilbao Guggenheim Museum (the so-called Guggenheim effect), and continuing with the Euskalduna Conference Centre and Concert Hall, Santiago Calatrava's Zubizuri, the metro network by Norman Foster, the tram, the Iberdrola Tower and the Zorrozaurre development plan, among others. Many officially supported associations such as Bilbao Metrópoli-30 and Bilbao Ría 2000 were created to monitor these projects.