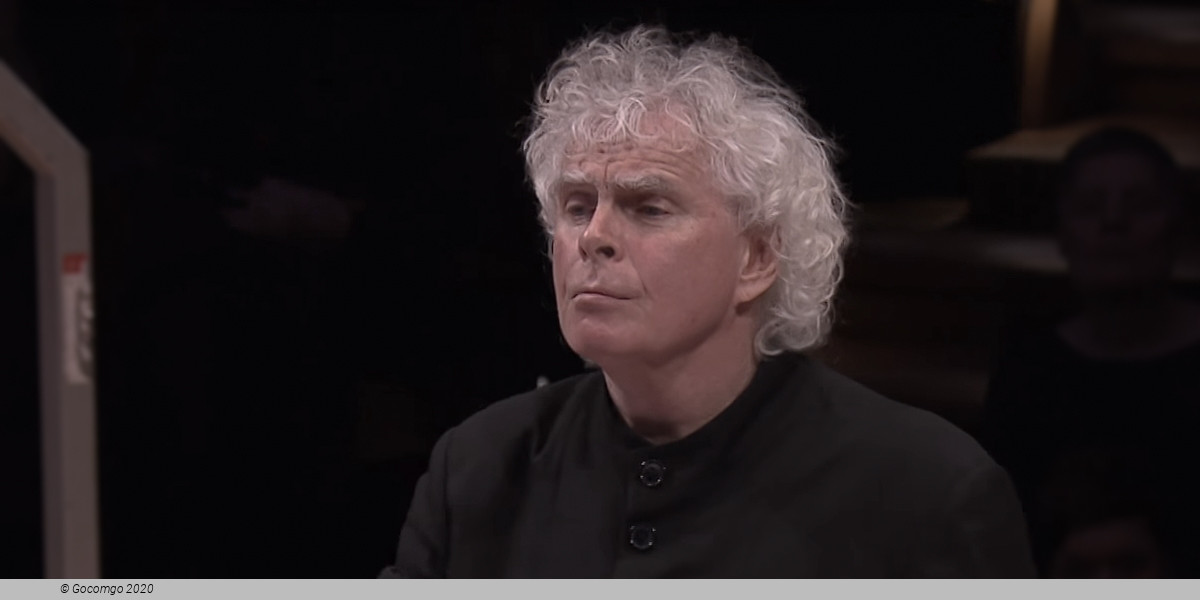 After studying at the Royal Academy of Music in London he took on various engagements in England and the USA, where he was principal guest conductor of the Los Angeles Philharmonic Orchestra. In 1980 Simon Rattle was appointed principal conductor and artistic adviser of the City of Birmingham Symphony Orchestra (CBSO). He became the orchestra’s music director in 1990 and remained with the ensemble until 1998.

In addition to the CBSO, Simon Rattle continued to conduct leading orchestras in the USA and Europe, enjoying long-term collaborations with such ensembles as the Boston Symphony Orchestra, the Philadelphia Orchestra and the Vienna Philharmonic. In May 2002 he recorded the complete Beethoven symphonies with the Vienna Philharmonic and joined forces with Alfred Brendel to record a boxed set of the Beethoven piano concertos. Since October 1992 Simon Rattle has been principal guest conductor of the Orchestra of the Age of Enlightenment and artistic adviser to the Birmingham Contemporary Music Group.

Since his operatic debut at the 1977 Glyndebourne Festival, Simon Rattle has continued to conduct opera regularly. He has appeared at opera houses in Paris, Amsterdam and London, and in January 2005 he was invited to the Wiener Staatsoper for the first time, where he conducted Richard Wagner’s Parsifal. In April 2008 he made his debut at the Staatsoper Berlin, conducting Claude Debussy’s Pelléas et Mélisande in a revival of the Ruth Berghaus production. In December 2010 he made his Metropolitan Opera New York debut with Pelléas et Mélisande.

Simon Rattle has led the Berliner Philharmoniker in staged productions of Ludwig van Beethoven’s Fidelio, Wolfgang Amadeus Mozart’s Così fan tutte, Benjamin Britten’s Peter Grimes and Claude Debussy’s Pelléas et Mélisande, Salome by Richard Strauss and George Bizet’s Carmen as well as a concert performance of Mozart’s Idomeneo at the Salzburg Easter Festival. Richard Wagner’s Der  Ring des Nibelungen was presented at Salzburg in a co-production with the Aix-en-Provence Festival, beginning with Das Rheingold in 2007, followed by Die Walküre in 2008 and Siegfried in 2009, with Götterdämmerung completing the cycle in 2010.

Before being appointed chief conductor of the orchestra, Simon Rattle had already collaborated with the Berliner Philharmoniker over a period of 15 years. His conducting debut with the ensemble took place on 14 November 1987 with a performance of Gustav Mahler’s Symphony No. 6. He continued to lead the orchestra on a regular basis, conducting repertoire ranging from Jean-Philippe Rameau to world premieres.

Simon Rattle has an exclusive recording contract with EMI; together they have produced more than 70 recordings with the CBSO and other orchestras. He inspired the British television series Leaving Home (Channel 4), which brings 20th-century orchestral music to the general public. The series is also available in Germany on DVD and won an award in 1997. Rattle’s recording partnership with the Berliner Philharmoniker began with recordings of Franz Liszt’s Faust Symphony and Gustav Mahler’s Symphony No. 10 in Deryck Cooke’s performing version. These were followed by Arnold Schoenberg’s Gurre-Lieder and Mahler’s Fifth Symphony in 2002, Ludwig van Beethoven’s Fidelio in 2003 and Olivier Messiaen’s Éclairs sur l’au-delà in 2004. In the same year, the Berliner Philharmoniker produced its first independent recording, Igor Stravinsky’s Le Sacre du printemps, which formed the soundtrack for the film Rhythm Is It! 2005 brought releases of Carl Orff’s Carmina Burana, a collection of orchestral songs by Benjamin Britten with Ian Bostridge and Antonín Dvořák’s symphonic poems. Franz Schubert’s Symphony No. 8 in C major, Richard Strauss’s Ein Heldenleben and Der Bürger als Edelmann, Gustav Holst’s The Planets, with Colin Matthews’s Pluto and compositions on asteroids by Kaija Saariaho, Brett Dean, Matthias Pintscher and Mark-Anthony Turnage, were released in 2006, as well as a collaboration with Krystian Zimerman as soloist in Johannes Brahms’s Piano Concerto No. 1 (on Deutsche Grammophon).

The 2007 recording of Brahms’s Ein deutsches Requiem with the Rundfunkchor Berlin and soloists Thomas Quasthoff and Dorothea Röschmann received a Grammy Award in February 2008. A Haydn concert of Symphonies No. 87 – 92, recorded live in the Berlin Philharmonie in February 2007, was released the following August. The live recording of the 2007 New Year’s Eve concert, with Pictures at an Exhibition by Mussorgsky/Ravel and Borodin’s Second Symphony and Polovtsian Dances, appeared on the market one week later. In March 2008 the live CD of Gustav Mahler’s Symphony No. 9, recorded in the Philharmonie in October of the previous year, was released. The recording of Stravinsky’s Symphony of Psalms and Symphony in C, released in June 2008, won a Grammy as “Best Choral Performance” in February 2009. Sir Simon Rattle’s recent releases include Anton Bruckner’s Symphony No. 4 in E-flat major and Maurice Ravel’s one-act opera L’Enfant et les sortilèges and Ma Mère l’Oye, recorded live in concert at the Philharmonie in September 2008. The recording of Johannes Brahms’s four symphonies was released in Germany in August 2009, and Peter Tchaikovsky’s Nutcracker was released in September 2010. Mahler’s Symphony No. 2 was published in Spring 2011. The recording of Johann Sebastian Bach’s St Matthew Passion in a ritualisation by Peter Sellars, which was performed in April 2010 in the Philharmonie, was released on DVD and Blu-ray in Spring 2012. Furthermore a CD (EMI) with the live recording of a Philharmoniker concert in February 2012 featuring Anton Bruckner’s Symphony No. 9 in the performing edition of the fourth movement completed from the manuscripts by Samale-Phillips-Cohrs-Mazzuca is available since May 2012.

In 1994 Simon Rattle was knighted by the Queen of England and has since received numerous distinctions. In 1996 the Toepfer Foundation in Hamburg awarded him the Shakespeare Prize; in 1997 he received the Albert Medal from the Royal Society of Arts in recognition of his extraordinary service to music, his activities in music education and his contributions to the musical community, all of which are important aspects of his work in Berlin. Since assuming his post as artistic director of the Philharmonic in September 2002, he has taken the orchestra in new directions with the Education Programme of the Berliner Philharmoniker. He has been honoured many times for his commitment to music education. In May 2005 he was awarded the Schiller Special Prize by the city of Mannheim, and in Spring 2007 he received the Golden Camera and the Urania Medal. In November 2007 Sir Simon Rattle was awarded the German Children’s Prize, and the same month he and the Berliner Philharmoniker were appointed as international UNICEF Goodwill Ambassadors in New York, the first time this honour has been conferred on an artistic ensemble. In spring 2009 Sir Simon Rattle received the Spanish Premio Don Juan de Borbón de la Música in Segovia. He was awarded the Order of Merit of the Federal Republic of Germany by President Horst Köhler in October 2009, twenty years after the fall of the Berlin Wall. In June 2010 Sir Simon Rattle was awarded a knighthood in the French Legion of Honour on behalf of the French President by Bernard de Montferrant, the French ambassador to Germany