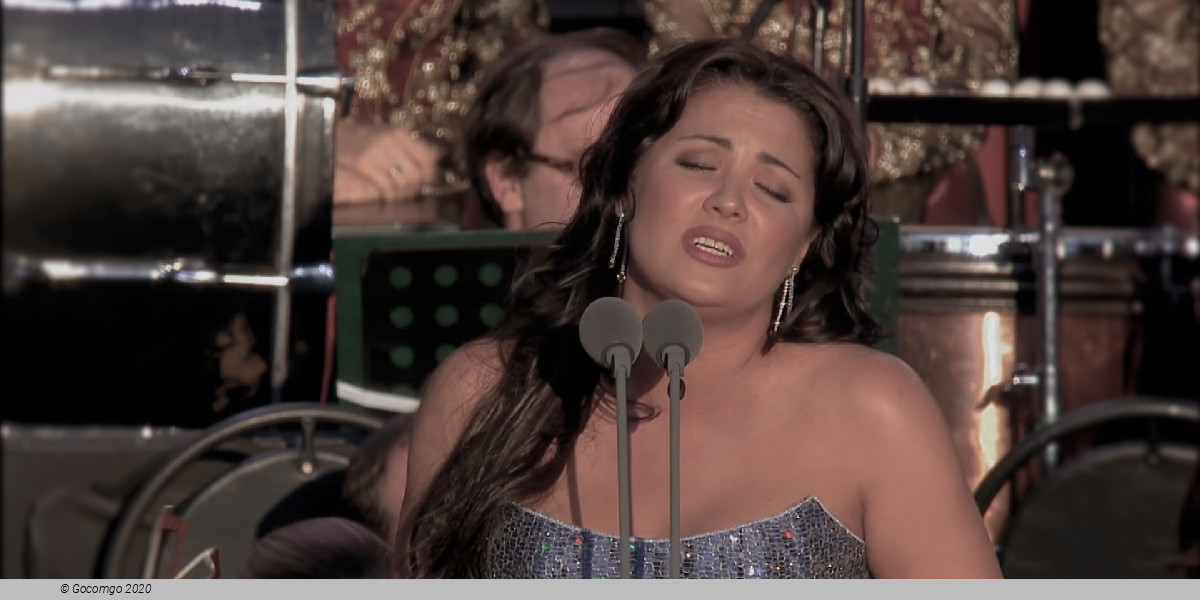 Anna Yuryevna Netrebko is a Russian operatic soprano. She holds dual Russian and Austrian citizenships and resides in Vienna, Austria, and in New York City. She is a frequent guest of the Metropolitan Opera, Vienna State Opera, Mariinsky Theatre, and Royal Opera House in London.

Netrebko was born in Krasnodar (Russia), in a family of Kuban Cossack background. While a student at the Saint Petersburg Conservatory, Netrebko worked as a janitor at Saint Petersburg's Mariinsky Theatre. Later, she auditioned for the Mariinsky Theatre, where conductor Valery Gergiev recognized her from her prior work in the theatre. He subsequently became her vocal mentor.

Under Gergiev's guidance, Netrebko made her operatic stage debut at the Mariinsky at age 22, as Susanna in Le nozze di Figaro. She went on to sing many prominent roles with the company, including Amina in La sonnambula, Pamina in Die Zauberflöte, Rosina in Il Barbiere di Siviglia, and Lucia in Lucia di Lammermoor. In 1994, she sang the Queen of the Night in Die Zauberflöte with the Riga Independent Opera Avangarda Akadēmija under conductor David Milnes. In 1995, at the age of 24, Netrebko made her American debut as Lyudmila in Glinka's Ruslan and Lyudmila at the San Francisco Opera. Following this successful performance, she became a frequent guest singer in San Francisco. She is known as an acclaimed interpreter of other Russian operatic roles, such as Natasha in Prokofiev's War and Peace, Louisa in Betrothal in a Monastery and Marfa in The Tsar's Bride. Netrebko has also made successful forays into bel canto and romantic roles such as Gilda in Rigoletto, Mimì in La bohème, Giulietta in Bellini's I Capuleti e i Montecchi, and Elvira in I puritani.

2000s
In 2002, Netrebko made her debut at the Metropolitan Opera as Natasha in the Met premiere of War and Peace. In the same year, she sang her first Donna Anna at the Salzburg Festival's production of Don Giovanni, conducted by Nikolaus Harnoncourt. She also performed at the Russian Children's Welfare Society's major fund raiser, the "Petroushka Ball". She returned to the Ball in 2003 and 2006 and is an honorary director of the charity.

In 2003, Netrebko performed as Violetta in Verdi's La traviata in Munich, the title role in Lucia di Lammermoor at the Los Angeles Opera, and Donna Anna at the Royal Opera House, Covent Garden. Her second album, Sempre Libera, was released the following year. She later appeared as Violetta Valéry in La traviata at the Salzburg Festival, conducted by Carlo Rizzi and in 2008 she performed the same role at Covent Garden to triumphant acclaim on the opening night, opposite Jonas Kaufmann and Dmitri Hvorostovsky in performances conducted by Maurizio Benini. However, she cancelled three subsequent performances due to suffering a bronchial condition. This was the second time she had cancelled her performances at the Royal Opera House, having withdrawn from some performances of Don Giovanni the previous summer due to illness. She sang Violetta's aria Sempre libera when she briefly played herself in the 2004 film The Princess Diaries 2: Royal Engagement.

On 30 May 2007, Netrebko made her Carnegie Hall debut with Dmitri Hvorostovsky and the Orchestra of St. Luke's. Originally scheduled for 2 March 2006, Netrebko postponed the recital because she did not feel artistically ready. Netrebko appeared at the Last Night of the Proms on 8 September of that year where she performed Ah! se una volta ... Ah! non credea mirarti ... Ah! non giunge from La sonnambula, Meine Lippen, sie küssen so heiß (Giuditta) and the song Morgen! by Richard Strauss (with violinist Joshua Bell). In the fall of 2007 she reprised her role as Juliette in Roméo et Juliette at the Metropolitan Opera, and in December Netrebko performed for Martin Scorsese, a 2007 Honoree, at the Kennedy Center Honors. That same year, she announced that she would be an ambassador for SOS Children's Villages in Austria, and be a sponsor for the Tomilino village in Russia.

In May 2008, she made a much-awaited debut at the Paris Opera in I Capuleti e i Montecchi, with Joyce DiDonato as her Romeo. In her first performance after her maternity leave, Netrebko sang Lucia in Lucia di Lammermoor when it opened at the Mariinsky Theatre in Saint Petersburg on 14 January 2009, in a production from the Scottish Opera led by John Doyle. She then sang the same role in January and February 2009 at the Metropolitan Opera. Netrebko appeared as Giulietta in I Capuleti e i Montecchi at the Royal Opera House in Spring 2009, and as Violetta in La traviata in June 2009 at the San Francisco Opera.

2010s
In October and November 2010, she sang the role of Norina in Don Pasquale at New York's Metropolitan Opera House under conductor James Levine. The matinee performance on 13 November was broadcast nationwide by PBS. On 2 April 2011, she sang the title role of Gaetano Donizetti's Anna Bolena at the Vienna State Opera for a sold-out premiere there, and the repeat performance on 5 April 2011 was broadcast live to cinemas around the world. On 7 December 2011 she opened the new season at La Scala in Milan as Donna Anna in Don Giovanni. She has the distinction of being invited to appear in three consecutive opening night new productions at the Metropolitan Opera: Anna Bolena in 2011, L'elisir d'amore in 2012, and Eugene Onegin in 2013. Her performance as Lady Macbeth in the Metropolitan's 2014 fall season's production of Macbeth, a revival of Adrian Noble's 2007 production, drew critical praise and demonstrated her voice is still expanding in range and volume. She continued her expansion into heavier Verdi roles at the Met the following year, singing the role of Leonora in Il trovatore to acclaim from both critics and audiences.

Netrebko performed the Olympic Anthem at the opening ceremony of the 2014 Winter Olympics in Sochi, near her native Krasnodar. In December 2014, she posed alongside Oleg Tsaryov with a flag of Novorossiya (a self-proclaimed confederation in Ukraine) and gave a $19,000 cheque to Tsarov saying she was donating to the Donetsk opera and ballet theatre. Tsarov is one of the individuals sanctioned by the European Union for his role in the 2014 pro-Russian unrest in Ukraine. Netrebko said in a statement "I want to make clear, however, that this donation is not a political act".

In April 2016, Netrebko announced her withdrawal from productions of Bellini's Norma at the Royal Opera House's 2016/17 season and the Metropolitan Opera's 2017/18 season due to the change in her voice. The vacancies were filled by Bulgarian soprano Sonya Yoncheva and American soprano Sondra Radvanovsky respectively.

She made several role debuts in 2017, including the title role of Adriana Lecouvreur at Mariinsky Theatre in June, the title role of Aida at Salzburg Festival in August, and Maddalena in Andrea Chénier at La Scala in December. In 2018, she debuted as Tosca at the Metropolitan Opera in April and performed at the Summer Night Concert Schönbrunn in June.

In March 2006, Netrebko applied to become an Austrian citizen, receiving her citizenship in late July. According to an interview in the Austrian weekly news, she will live in Vienna and Salzburg. Netrebko cites the cumbersome and humiliating process of obtaining visas (as a Russian citizen) for her many performances abroad as the main reason for obtaining Austrian citizenship.

In April 2008, Netrebko announced that she and Uruguayan bass-baritone Erwin Schrott had married; however, their wedding never in fact took place. Their son, officially named Tiago Netrebko, was born on 5 September 2008 in Vienna and is an Austrian citizen. In November 2013 the couple announced their separation, after several months of largely separate lives. Tiago, who is mildly autistic, lives exclusively with her.

In February 2014 during rehearsals for a staging of Manon Lescaut in Rome, Netrebko began a relationship with her co-star in that opera, the Azerbaijani tenor Yusif Eyvazov. Five months later the couple announced their engagement. In July 2015 they said they would wed in Vienna. Eyvazov was born in 1977 in Algiers, Algeria, the son of an Azerbaijani university professor working abroad. Netrebko and Eyvazov were married on 29 December 2015, at the Palais Coburg in Vienna with 180 guests in attendance, including tenor Plácido Domingo. Netrebko has an apartment in the Upper West Side of Manhattan, overlooking the Hudson River.

Netrebko is a close friend of Austrian fashion designer Irina Vitjaz, and has worn several of her designs.