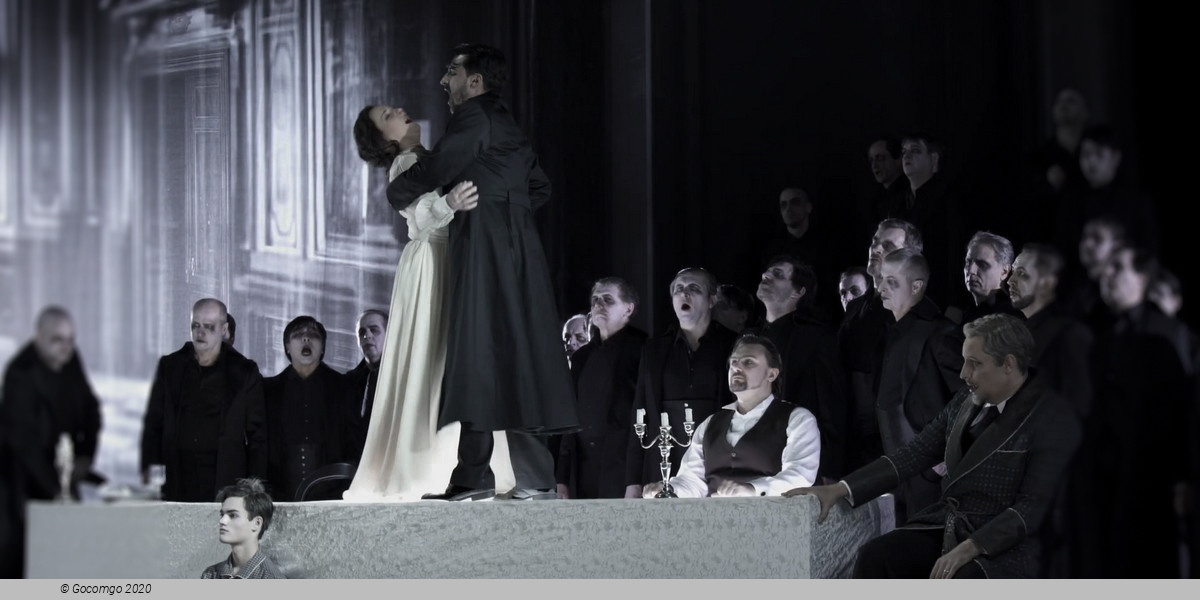 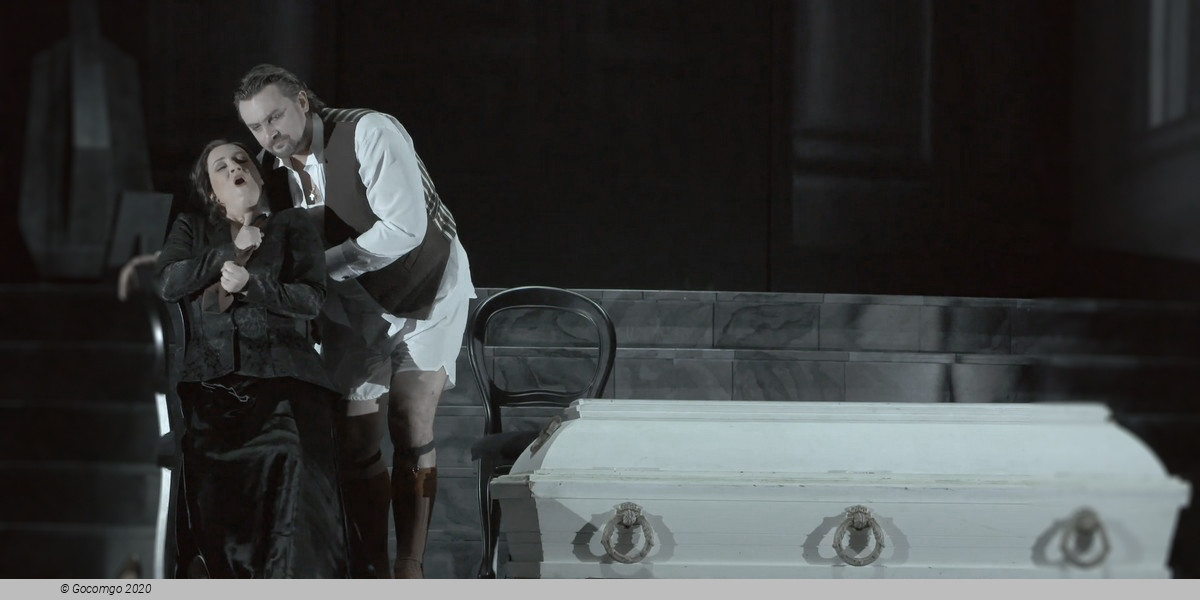 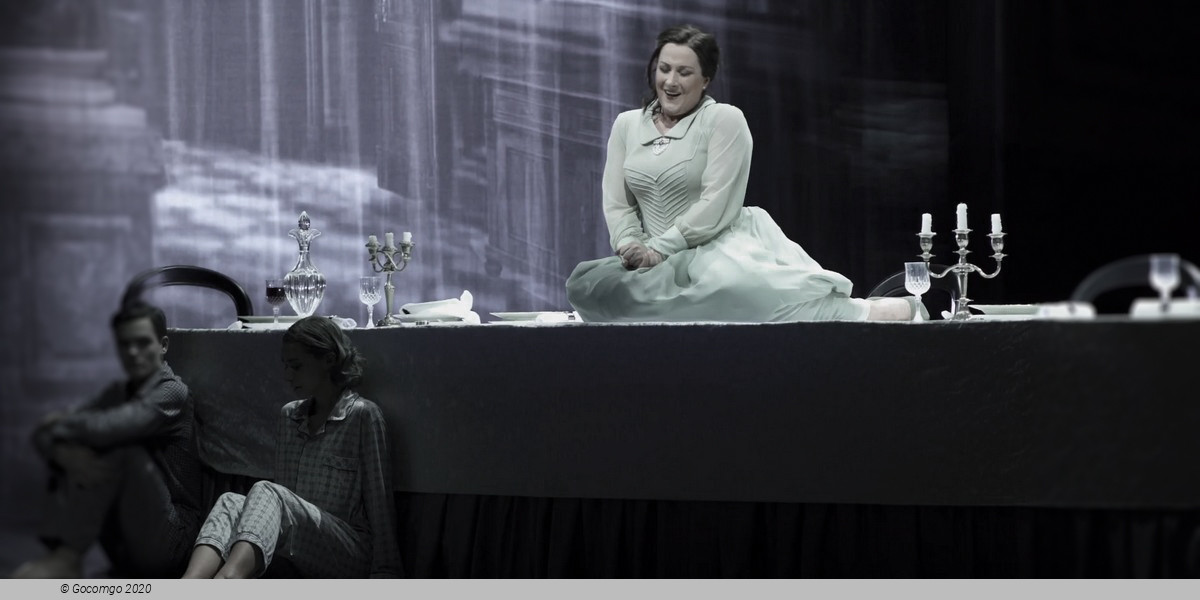 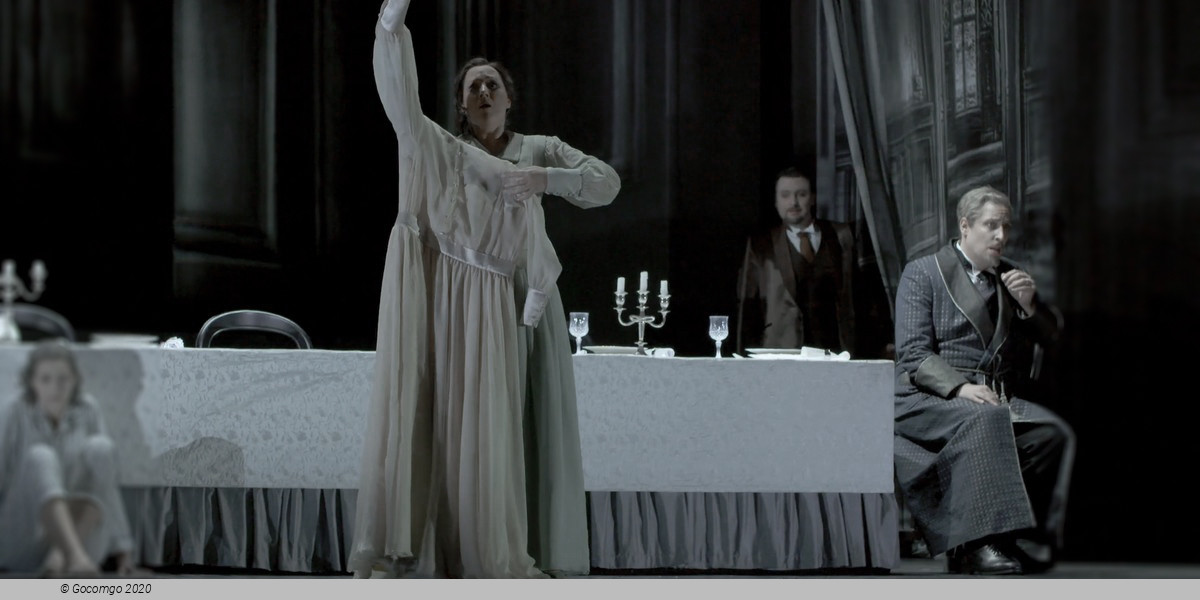 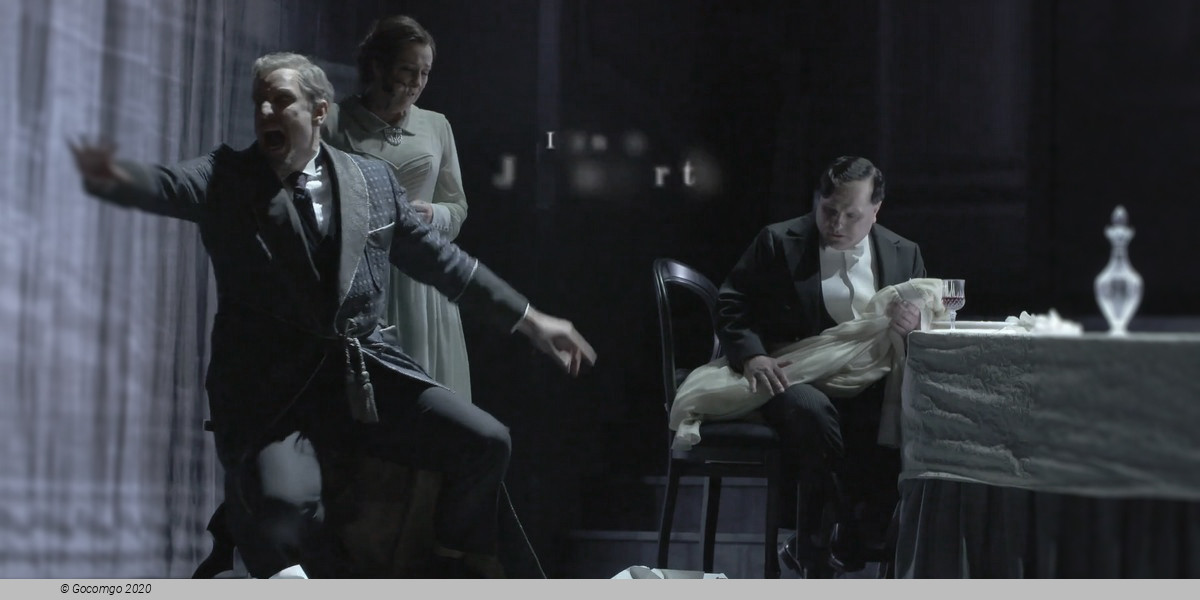 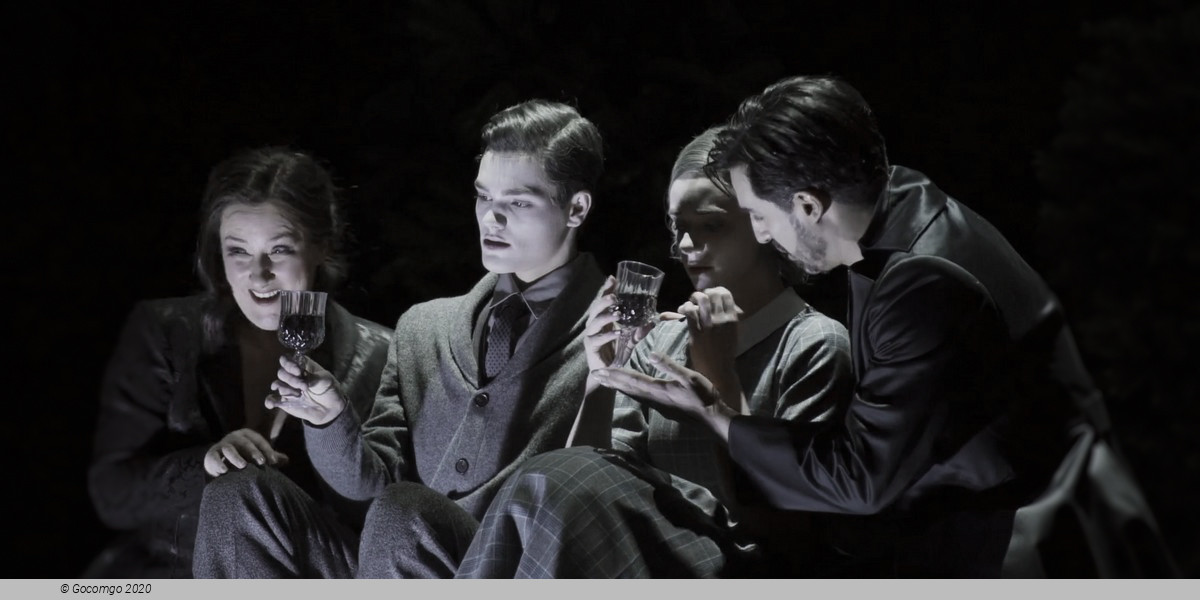 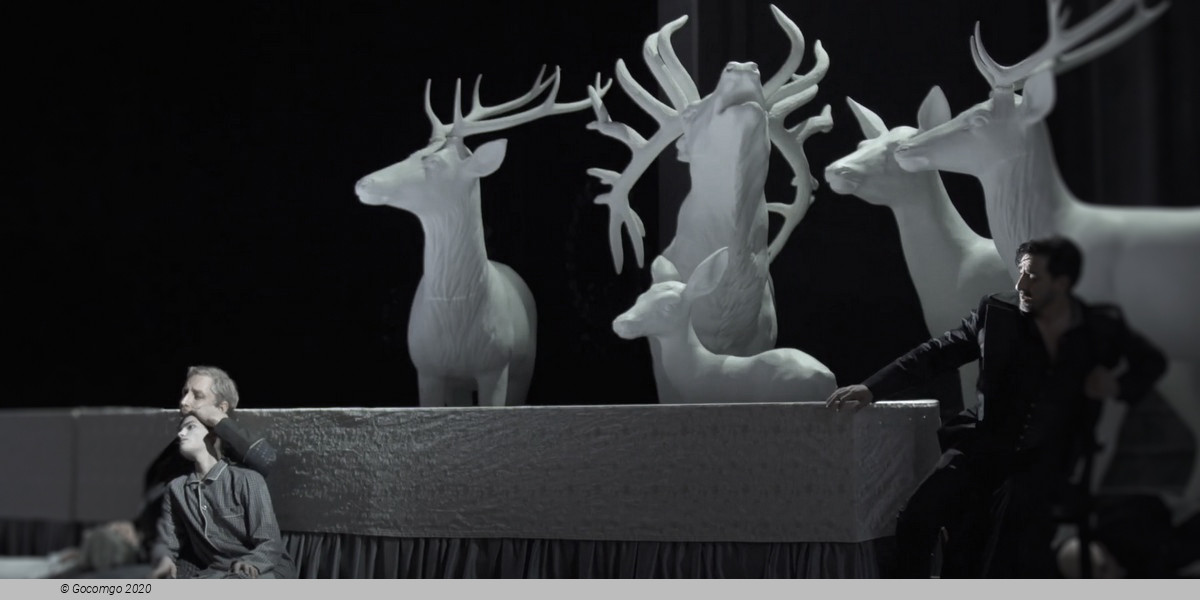 A famous Verdi piece that hardly anyone knows. A plot bursting under high-pressure from the very beginning.

A work, incandescent with love and hate, about people searching for a valve to release their passion, with arias that can scarcely be controlled with their emotional abundance. A German story as an Italian opera: Verdi wrote I masnadieri for a libretto based on Friedrich Schiller’s The Robbers. Karl and Franz become Carlo and Francesco; instead of combating social grievances as in the play, in the opera all the characters struggle to keep up with a family story that is laden with early loss and brotherly rivalry, with suppressed desire and misunderstood needs. Slander, blackmail and knife fights become the stuff of the confrontation. The political conflict of The Robbers is intensified on the personal level in Verdi’s opera. It’s not the age that appears to be decrepit, it’s the people. As a commissioned work by Her Majesty’s Theatre in London, I masnadieri was the first opera that Verdi wrote for a theatre outside of Italy, a work during the upheaval at the end of his “galley years”. In his Macbeth created almost in parallel the fissures are already breaking open; in I masnadieri the subterranean fault lines are just about to explode – a tension that is expressed with every beat of the music, in the solos just as much as in the famous robber choirs. Johannes Erath, who had already staged Un ballo in maschera in Munich with an interpretation that profoundly explores the characters, stages this opera as a chamber play of overflowing dimensions.

History
Premiere of this production: 22 July 1847, Her Majesty's Theatre, London

I masnadieri (The Bandits or The Robbers) is an opera in four acts by Giuseppe Verdi to an Italian libretto by Andrea Maffei, based on the play Die Räuber by Friedrich von Schiller. As Verdi became more successful in Italy, he began to receive offers from other opera houses outside the country. The London impresario Benjamin Lumley had presented Ernani in 1845 and, as a result of its success, commissioned an opera from the composer which became I masnadieri. It was given its first performance at Her Majesty's Theatre on 22 July 1847 with Verdi conducting the first two performances.

During its early years, the National Theatre saw the premières of a significant number of operas, including many by German composers. These included Wagner’s Tristan und Isolde (1865), Die Meistersinger von Nürnberg (1868), Das Rheingold (1869) and Die Walküre (1870), after which Wagner chose to build the Festspielhaus in Bayreuth and held further premières of his works there.

During the latter part of the 19th century, it was Richard Strauss who would make his mark on the theatre in the city in which he was born in 1864. After accepting the position of conductor for a short time, Strauss returned to the theatre to become principal conductor from 1894 to 1898. In the pre-War period, his Friedenstag (1938) and Capriccio were premièred in Munich. In the post-War period, the house has seen significant productions and many world premieres.

First theatre – 1818 to 1823
The first theatre was commissioned in 1810 by King Maximilian I of Bavaria because the nearby Cuvilliés Theatre had too little space. It was designed by Karl von Fischer, with the 1782 Odéon in Paris as architectural precedent. Construction began on 26 October 1811 but was interrupted in 1813 by financing problems. In 1817 a fire occurred in the unfinished building.

The new theatre finally opened on 12 October 1818 with a performance of Die Weihe by Ferdinand Fränzl, but was soon destroyed by another fire on 14 January 1823; the stage décor caught fire during a performance of Die beyden Füchse by Étienne Méhul and the fire could not be put out because the water supply was frozen. Coincidentally the Paris Odéon itself burnt down in 1818.

Second theatre – 1825 to 1943
Designed by Leo von Klenze, the second theatre incorporated Neo-Grec features in its portico and triangular pediment and an entrance supported by Corinthian columns. In 1925 it was modified to create an enlarged stage area with updated equipment. The building was gutted in an air raid on the night of 3 October 1943.

Third theatre – 1963 to present
The third and present theatre (1963) recreates Karl von Fischer's original neo-classical design, though on a slightly larger, 2,100-seat scale. The magnificent royal box is the center of the interior rondel, decorated with two large caryatids. The new stage covers 2,500 square meters (3,000 sq yd), and is thus the world's third largest, after the Opéra Bastille in Paris and the Grand Theatre, Warsaw.

Through the consistent use of wood as a building material, the auditorium has excellent acoustics. Architect Gerhard Moritz Graubner closely preserved the original look of the foyer and main staircase.[5] It opened on 21 November 1963 with an invitation-only performance of Die Frau ohne Schatten under the baton of Joseph Keilberth.[6] Two nights later came the first public performance, of Die Meistersinger von Nürnberg, again under Keilberth.